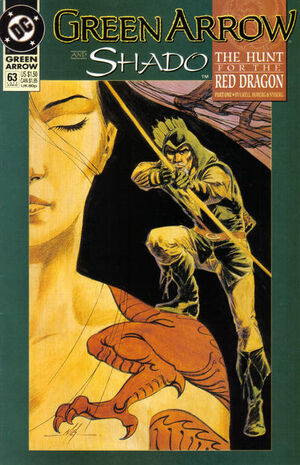 There's nothing quite like being so old you're back to one candle on your birthday cake. It's like people can't count that high or something.

Appearing in "The Hunt for Red Dragon Part 1"Edit

Synopsis for "The Hunt for Red Dragon Part 1"Edit

Green Arrow stops a mugging on the streets of Seattle, and then returns home to a birthday party thrown by Dinah Lance. Eager to keep their birthday tradition intact, Oliver forgoes the cake, and he and Dinah make love.
Later, a man arrives at the door of the Sherwood Florist bearing the gift of the bow that Oliver's idol Howard Hill had used while filming the Errol Flynn Robin Hood movies. The bow is Oliver's on the condition that he visit a man named Ronald Quaid on his estate in Michigan. Despite Dinah's grumpiness, Oliver agrees.
It becomes apparent that Mr. Quaid is a very rich eccentric. Quad greets Oliver in his home recounting the tale of how his stepfather had been involved in the extortion of a Japanese businessman, in an internment camp. As the story unfolds, it becomes clear that Quaid's stepfather had in fact been involved in the extortion of Shado's father. Mr. Quaid wishes Oliver to track Shado down, and deliver the 3 million dollars that his stepfather stole from her father, as a matter of restoring their collective honour.
Eventually, Oliver agrees to accept 50 thousand dollars in exchange for tracking Shado down. After he leaves, Quaid orders one of his men to follow Oliver, casting doubt on his intentions.

Retrieved from "https://heykidscomics.fandom.com/wiki/Green_Arrow_Vol_2_63?oldid=1428248"
Community content is available under CC-BY-SA unless otherwise noted.