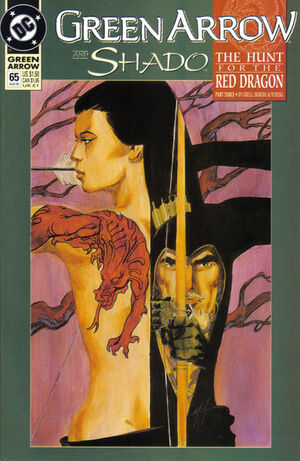 That's okay... Stupidity should be painful.

Appearing in "The Hunt for Red Dragon Part 3"Edit

Synopsis for "The Hunt for Red Dragon Part 3"Edit

As Ronald Quaid's men prepare to burst into the locked room in which Oliver Queen and Shado are struggling to breath in the clouds of gas, Shado looses an arrow through the door, killing one of their assailants. The archers fight their pursuers, but soon succumb to the gas' effects, and collapse on the floor.
Quaid's men make up Ollie and Shado to appear as brain-dead bodies being kept alive for organ donations, and smuggle them out of Japan. They awake much later in the home of Ronald Quaid. Quaid reveals that despite his earlier briefing to Oliver, his step-father is alive, and the whole deal was a ploy to get Oliver to bring Shado to him.
Quaid has collars put around Oliver and Shado's necks, and then demonstrates that they can be made to explode at his command. He reveals his plan to have the archers hunt down the key to disarming their collars, which is hidden somewhere on an island filled with traps. If they can find the key before he finds and kills them, they will be free with his three million dollars as a reward.
Oliver agrees, thinking that the odds are in their favour. Shado wonders what Quaid hopes to gain from the contest, and he reveals that he is a collector of tattoos by Horiyoshi - including the skin on which they were inked - and that Shado was the last person to receive one of his tattoos. Quaid hopes to catch and kill Shado, skin her, and take her tattoo.
Oliver and Shado are left with little choice but to track down the keys to their collars before the 24 hours are up, and they are killed.

Retrieved from "https://heykidscomics.fandom.com/wiki/Green_Arrow_Vol_2_65?oldid=1428250"
Community content is available under CC-BY-SA unless otherwise noted.