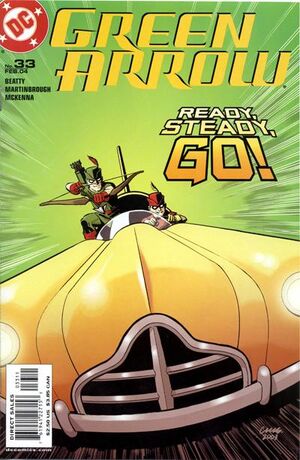 Mia Dearden discovers that someone is selling what appears to be Ollie's old Arrowcar on an online auction. Ollie assure her that it is not the same vehicle and goes on to tell her about the last adventure he had with the car. Ironically, it was also the last team-up between Ollie and Speedy before disolving their partnership. The two had been fighting Kobra cultists over a shipment of stolen weapons, and Speedy was bitter at Ollie for his behavior towards him during Roy's drug rehabilitation. While stopping Kobra, it seemed as if the Arrowcar was destroyed.

Ollie then pays a visit to the JLA Watchtower to go over a few old keepsakes, including the detonation device that he used to "destroy" the Arrowcar. While there, he helps Superman and Plastic Man stop an escaped Starro spore.

Meanwhile, the Scavenger pays a visit to the home of "Carfiend", the man who is selling the Arrowcar. Scavenger asks the man's assurance that the article is genuine, and announces his intention to win the auction.

Mia decides to bid on the auction and gets into an online bidding war with Scavenger. Both of them lose however to a buyer code-named Fledermaus. Fledermaus is actually Batman. Batman sends Mia an instant message in which he tells Ollie to take better care of his toys.

Ollie and Mia collect the Arrowcar and get into a fight with Scavenger. They take off in the vehicle and Scavenger gives chase. The car races underneath an eighteen-wheeler, but Scavenger is coming up behind them too high and too fast. He smashes into the side of the truck and Ollie and Mia make a clean getaway. Later, Ollie decides to destroy the Arrowcar for real and sets it off with a detonator. When they get home, he decides to give Roy a call.

Retrieved from "https://heykidscomics.fandom.com/wiki/Green_Arrow_Vol_3_33?oldid=1517493"
Community content is available under CC-BY-SA unless otherwise noted.