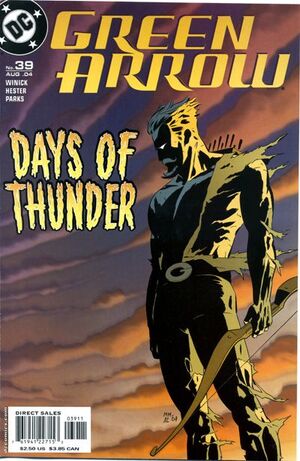 Green Arrow gathers everyone together in preparation of taking Albert Davis' house. The chief of police deputizes all of the serviceable citizens and has a judge draw up a warrant to arrest Albert Davis. They attempt to storm the front line of demons but the demons begin cutting through them with their swords. Mia is overhead on a bluff playing sniper, firing arrows down at the demons. Ollie circles back and meets up with her. They use a catapault to launch themselves over the demons into an upper window of Davis' mansion. They find Albert chained up to a wall. Albert originally cast the spell summoning the demons in order to enforce peace upon the city. He had no idea how chaotic things would become. The only way to break the spell is to kill him. Ollie doesn't have the heart to take a life, so Mia fires a fatal shot into Davis' heart, killing him. With Davis' death, the demons disappear and the mystic shield covering the city collapses. Mia is traumatized over what she felt she had to do.

Retrieved from "https://heykidscomics.fandom.com/wiki/Green_Arrow_Vol_3_39?oldid=1641806"
Community content is available under CC-BY-SA unless otherwise noted.