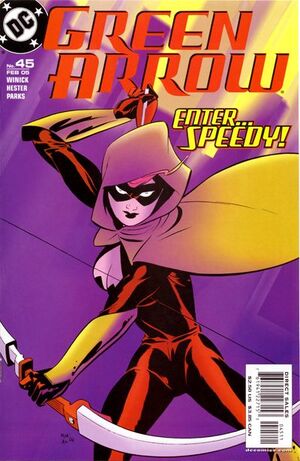 Oliver Queen... I'm doing this whether you want me to or not... I'm telling you... this is the life I'm choosing. I want to fight by your side. Please... let me do it at your side.

Mia Dearden goes to her high school where she addresses the student body on the subject of AIDS. She tells the assembly that she is HIV positive and gives them an inspirational speech about living with AIDS. From outside the school gymnasium, Ollie and Connor discuss Mia's performance. Connor is very proud of her, but Ollie is upset. He is having difficulty coping with Mia's illness.

To let off steam, Ollie dons his gear and raids the apartment of crime boss Danny "Brick" Brickwell. He challenges Brick to a fight and the two begin trading blows. Green Arrow sinks several shafts into Brick's body, but the super-durable villain barely even feels them. Brick begins slapping Ollie across the face, nearly beating him senseless. As a last ditch effort to win the fight, Ollie withdraws a Glue Bomb arrow and fires it into Brick's mouth. Brick falls to the floor unable to breathe. With the villain defeated, Ollie sprays him with a chemical that dissolves the glue and reminds Brickwell of just who it is that just defeated him.

That night, Ollie returns home where Mia is waiting for him. Mia knows about his fight with Brick, and feels that Ollie only attacked him as a means of coping with his own helplessness with regards to Mia's illness. Having come to terms with living with AIDS, Mia is ready for the next major change in her life. She puts on a yellow and red costume and tells Ollie that she is to be his new partner - Speedy. Queen is strongly opposed to this decision, but Mia convinces him that she needs this in her life in order to maintain her focus. Reluctantly, Ollie accepts her as the new Speedy.

Retrieved from "https://heykidscomics.fandom.com/wiki/Green_Arrow_Vol_3_45?oldid=1528904"
Community content is available under CC-BY-SA unless otherwise noted.