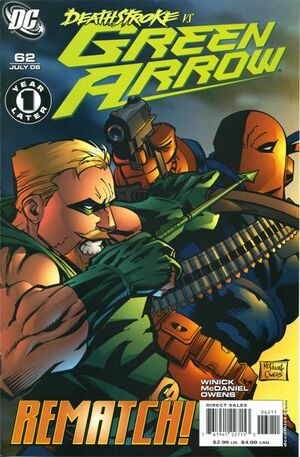 It pains me to do so, but we cannot, we will not, tolerate any person giving aid to violent criminals.

Appearing in "Crawling Through the Wreckage, Part 3: An Eye for an Eye"Edit

Synopsis for "Crawling Through the Wreckage, Part 3: An Eye for an Eye"Edit

Green Arrow has returned to Star City amid great controversy -Commissioner Nudocerdo while Mayor Queen is busy with Deathstroke (whom did not have an appointment). Deathstroke uses a tranquilizer to knock out Ollie, so he can set him up in part of a devious plan to ruin his reputation. However, Ollie is wearing body armor and has a small bomb that he sets off to distract Deathstroke while he fights back. More than just fighting back, Green Arrow ensares Deathstroke in an elaborately planned trap involving a ten-inch deep adhesive swamp. Deathstroke is stuck. To further suprise Deathstroke, Green Arrow comes at him with a sword! Desperate, Deathstroke blinds Green Arrow and tries to escape but finds himself surrounded by National Guard Snipers. Deathstroke is under arrest!

Retrieved from "https://heykidscomics.fandom.com/wiki/Green_Arrow_Vol_3_62?oldid=1508117"
Community content is available under CC-BY-SA unless otherwise noted.