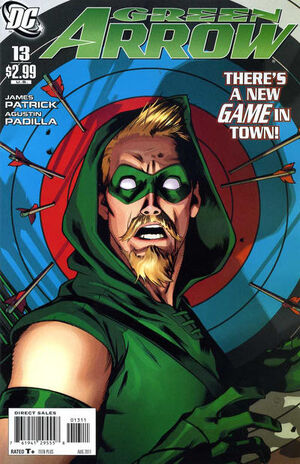 The good news is that I can hear sirens two blocks away. The bad news is the Reverend's followers don't give up easily. But neither do I. Then I realize the last suit is coming in so fast that any shot I take is going to go through him. And the only angle I have is at his head. And that's when I remember what an arrow does to anatomy. How it tears through organs, arteries and fragments bones. When I said I had forgotten those little experiments, I wasn't lying. The problem is that I've done some things lately that I'm not proud of, and I've started remembering them again.

The story starts with a lady being seen by a doctor. While asking her some routine questions they overhear what sounds like a car accident outside. As the doctor heads out to investigate the cause of the commotion, both he and his patient are engulfed in flames.

Now the scene switches to memories of Oliver's past as he reminisces about how when he first became a hero he sought to understand just how devastating arrows could be by practicing with them on cadavers.

Back in the present, Oliver sits in a tree when he is approached by Federal Marshal Donovan who says she needs his help with something. This something turns out to be help escorting the Reverend Billy Miggs to the airport so he can be extradited to Arkansas for arraignment. As it turns out, Miggs is the head of a Church called the Southern Order of Change that orchestrated militant attacks on several organizations that Miggs disagreed with. Nine people were killed as a result. Due to the access to high-tech weaponry and armor that Miggs's terroristic followers had, Donovan enlisted Oliver's because she believed that he would be willing to kill, if necessary, to prevent Miggs's escape. She knew mentioned Queen's killing of Prometheus as being the reason why she sought him out.

The ride to the airport is only about five minutes long but almost immediately upon setting out for the airport, the van transporting Miggs, Donovan, and Miggs comes under attack from his well-equipped followers. Oliver both deftly combats them while saving numerous pedestrians' lives in the process. After fending off all but one of Miggs's would-be liberators, the circumstances take a turn that force Oliver to make an ethically harrowing decision: stop Migg's last follower by shooting him in the head and potentially killing him, or letting him potentially free Miggs. For a brief moment,his mind once again goes back to when he tested out arrows on cadavers and he makes a choice...

The pursuing follower summons aid and a newly formed troupe of Miggs's followers proceed to liberate their leader. Once again, Oliver has a choice: kill the prisoner or let him escape. Donovan futilely lets off a few rounds in an attempt to stop Miggs, but he escapes. Oliver apologizes to Donovan but she reprimands him reminding him that more lives may be lost due to his inaction. Queen tells himself that he's going after Miggs...

Retrieved from "https://heykidscomics.fandom.com/wiki/Green_Arrow_Vol_4_13?oldid=1428412"
Community content is available under CC-BY-SA unless otherwise noted.