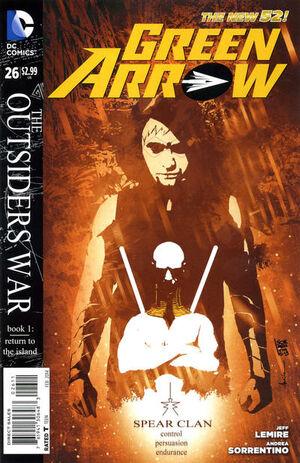 I am going to that damned island... with or without you, Oliver. I'm getting Emiko back... and I'm going to have Komodo's head for what he did.

Appearing in "The Outsiders War, Book One: Return to the Island"Edit

Synopsis for "The Outsiders War, Book One: Return to the Island"Edit

Green Arrow has finally recovered from the attack he suffered at the hands of Count Vertigo that damaged his inner-ear. With the streets of Seattle in relative quiet, Shado suggests that it is high time they went back to the island on which Oliver spent years, stranded. With Komodo, the man who murdered Ollie's father, still at large with the girl Emiko - Shado's daughter and Oliver's half-sister - at his side, Oliver thinks they have better things to do. Shado insists, though, that with the power of the other weapon clans - the Outsiders on his side, Komodo is more powerful. The Outsiders seek to have the Arrow Clan rejoin them - and the totemic weapon of that clan lies on the island. If they have it, it will be a powerful bargaining chip in getting Emiko back.

Oliver believes that given how long he spent on the island, he would have found it in that time, but Shado points out that he hadn't actually been looking for the arrow head. He was merely trying to survive. Henry Fyff, meanwhile, thinks Ollie should stay in Seattle, recovering and trying to handle Richard Dragon's play for the city's underworld. Likewise, Naomi Singh warns against trusting Shado. Annoyed, Shado announces that regardless of Oliver's decision, she will be going to the island, and she will have Komodo's head for what he did.

Following Shado away from their friends, Ollie explains that Naomi was merely trying to look out for him. Shado responds that it is clear that Naomi loves Oliver, and it would be best for him to cut ties with her, given the dangers of his lifestyle. There is no room for love. In any case, she turns her attention to the island, explaining that she believes Oliver's father knew that Lacroix would betray him; knew he would die. He had confided in her that a map to the totem existed, and she committed it to her memory before destroying it - explaining why the Outsiders were torturing her. If Oliver wants to find the totemic weapon, he will have to trust her - or at the least, trust his father's trust in her.

Stealing a chopper from A.R.G.U.S., Ollie and Shado are en route to the island within a week. Though he claims he is ready, internally, he is not. He can barely remember his life before the island. He wasn't so much a man then as a boy, and that boy drowned before Oliver even got to the island. What emerged on the shore was a blank slate, which - only after the island's gauntlet - made him the man he is today.

Elsewhere, at Arizona's Black Mesa, John Butcher meets with Magus, where the latter explains that the time has come to unite the rogue clans. Oliver Queen's war with the Outsiders is about to begin.

On the island, Oliver brings his bow and arrows, despite insisting that the place is deserted. He also insists that the place Shado marked on his map will lead to nothing, but she merely responds that he will see. Untypically allowing himself to be led, Oliver can't help but experience déjà vu. His father had always tried to encourage him toward archery, despite his resistance. At the time, he had thought it was a hobby, but now he understands that it was part of an obsessive search for the secrets of the Arrow Clan. The archery had been a ploy to help let Oliver in on his private world. When he became stranded on the island, though, Oliver cursed himself for slacking off on those lessons, disappointing his father. It was hunger that finally persuaded him to take the hobby seriously. When hunger made archery a necessity, he stopped being a boy, and became a hunter. He'd hoped, then, that his father would have been proud of him, finally. His feeling that his father was watching over him might have been caused by the fact that someone had been watching him - but it certainly wasn't Robert Queen.

Arriving at their destination, Shado demands an explosive-tipped arrow, aiming it at a rock face. The resulting explosion reveals a cave, and she explains that while he may never have found the totem arrow on the island, it was because he was not looking within it. Deep within the cave lies a cavern where the arrow rests.

Meanwhile , in Prague, Komodo returns to the outsiders, reporting on Oliver's activities of late. Rather than allow him to pursue Oliver and Shado to the island, Golgotha, head of the Outsiders, warns that he best serves them by staying and running Stellmoor Industries. In the meantime, they have already sent Kodiak and the Shield Clan to kill Shado and Oliver Queen by sundown.

Retrieved from "https://heykidscomics.fandom.com/wiki/Green_Arrow_Vol_5_26?oldid=1428479"
Community content is available under CC-BY-SA unless otherwise noted.