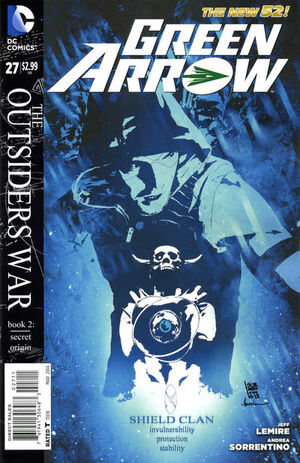 Don't tell me you accept the coincidence that you just happened to be stranded -- with a bow -- on the very island that your father had marked as the Arrow Clan's home?

Years ago, on the island, Oliver Queen was shaken awake by masked men, who demanded to know what he was doing on their island. Their leader warned them not to be too harsh, lest he lose consciousness again. He asked whether Oliver was there alone, but when Oliver claimed he was, having been caught in a shipwreck, the man didn't believe him. Annoyed, he had his men resume their water torture, warning that if Oliver didn't tell them why he was really on the island, he would die slowly.

Now, Oliver has returned to the island with Shado, who has led him to the Tomb of the Arrow Clan. The Green Arrow - the totemic weapon of the clan - though, appears to have gone missing. Shado is unconcerned, cryptically hinting at something he hasn't figured out yet. He has yet to ask the big questions she expected him to ask - like whether it was a coincidence that he ended up on this island with nothing but a bow. Seeing his frustration at the constant mystery, she explains that he should already know what the truth is - he's just buried it. Before she can say anything more, though, they are distracted by the loud pounding of a sound like drums. With horror, Shado reveals that it is the sound of the Shield Clan's approach.

Meanwhile, in San Francisco's Japantown, Katana receives an unwelcome visit from Magus. Naturally, he finds her Soultaker Sword at his throat, and he is forced to hurriedly explain that he needs her help in fighting a war that she is a part of whether she likes it or not. In truth, she has already been fighting that war for some time. The Sword Clan, Coil, and Mona Shard are all connected to the Outsiders. He explains that if she will come with him, he can answer every question she ever had - but there will be blood to spill before that.

Together, Shado and Oliver try to take down the Shield Clan with their arrows, but their enemies are too fast with the use of their shields, blocking every shot. Playfully, Oliver reminds Shado that she would be better off to use trick arrows as he does, and he looses several into the crowd of attackers. The resulting explosion convinces Shado that her mocking the trick arrows was unwarranted. Oliver takes out the remainder of the Shield Clan with his trick arrows, but fails to anticipate that they had a leader who might be stronger. That leader is Kodiak. Rather than fight, Oliver suggests they run, having a place to hide in mind.

That place is where the last remaining parts of the Oliver Queen that had been were stripped away. The more he was tortured, the more he had tried to hold on to who he was - and that had been a mistake. His torturer warned that he would do no good to keep the truth to himself. Their master would keep him alive until they got it out of him, no matter how much Oliver wanted to die. Eventually, Oliver realized that in order to survive, the old Oliver Queen would have to die.

He lashed out, knocking the chair he was strapped to over, causing its legs to shatter. Freed of his bonds, he grabbed a large splinter of wood, brandishing it against his torturer. The man cowered, warning with false bravado that it wasn't in Oliver Queen to kill. In answer, Oliver thrust the splinter into his neck, killing him - and killing the Oliver Queen that used to be. From that moment on, no one would ever hurt him again.

Oliver leads Shado back to the camp where he was tortured, and she remarks that this is just another example of how things are coming full circle; of how none of his life has been mere coincidence. The truth is that Oliver was never stranded on the island. It was planned. The torture he endured for weeks was really a test. The hunt that followed his escape was really training. And the man who did all that to him - the man who put Oliver on the island - was Robert Queen, who is alive, and has been living in that place ever since his reported death.

Retrieved from "https://heykidscomics.fandom.com/wiki/Green_Arrow_Vol_5_27?oldid=1428480"
Community content is available under CC-BY-SA unless otherwise noted.