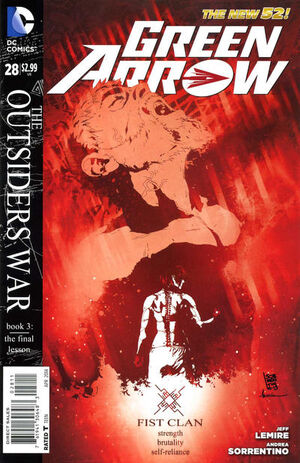 The Green Arrow. Our arrow. We are ready to reclaim our birthright... to reclaim The Outsiders.

Appearing in "The Outsiders War, Book 3: The Final Lesson"Edit

Synopsis for "The Outsiders War, Book 3: The Final Lesson"Edit

Oliver Queen has just been faced with the challenge of accepting the fact that his father, Robert, is alive, after years of having thought him dead. His immediate response is a combination of disbelief and anger, and he threatens to kill this man wearing his father's face. In order to prove himself, Robert tells Oliver of the day he brought his son a bike, and watched him scrape his left knee when he fell during his first ride. He had told Oliver that the injury was merely a raspberry. Oliver had responded that it was a battle scar.

When Oliver begins to accept the truth, Robert explains that he had feigned death to protect his son. When Simon Lacroix betrayed him to join the Outsiders, he had understood that the man would not stop killing until the entire Queen legacy was wiped out, and the Arrow Clan was his. With Magus' help, Robert and Walter Emerson arranged to fake his death at Komodo's hands. He then bought the island, and waited for Oliver to arrive.

When Oliver was old enough, they arranged to have him wash up on the island's shores. But Robert's attempts to keep Oliver from his secret life left the boy unprepared for the war that was to come, and so he would have to be trained to survive it. Seeing what his son has become now, Robert is proud of him; proud of the Green Arrow.

With horror, Oliver realizes that his father was the one who had fought him on the day he'd escaped. That battle had been a test, and he hadn't escaped from the island, he was let go. Shamefully, Robert explains that all the torture and violence Oliver underwent there were to prepare him. He had to be sure Oliver was ready to leave the island. Oliver realizes that if he hadn't been ready, his father would readily have killed him then. Fortunately or not, Oliver had been stronger than Robert had expected, and he was badly injured on the island, saved only by Magus' power. In the meantime, Emerson arranged for Oliver's rescue.

Since Oliver encountered Magus, everything was arranged to ensure that allies like Shado were gathered, and Oliver was brought back to the island to meet his father again. The time has come, though, to gather the remaining allies together, and fight to reclaim the Queen birthright: the Green Arrow, and their place in the Outsiders. This news angers Oliver, who blames Robert for failing to come to his mother's side when she was sick and dying, and he blames Shado for failing to tell him the truth. His anger must be shelved, though, when Kodiak of the Shield Clan attacks.

Meanwhile, in Seattle, Naomi Singh and Henry Fyff begin to worry about the state of the city's criminal underworld. Mob bosses are turning up dead, or are being driven further underground. Naomi is sure that the one responsible is Richard Dragon. They are surprised to hear a man's voice warn that they will never find Richard Dragon. Naomi recognizes the newcomer as John Diggle, the man who - along with Roy Harper used to help the Green Arrow before she and Henry replaced them. John explains that he came looking for Oliver, but is disappointed to learn that he isn't there, and neither Naomi nor Henry knows where he is. Grumpily, he reminds that Seattle is on the brink of gang war with Richard Dragon at its centre, and if Oliver is not there, it will be up to the pair of them to help him put an end to it.

At his private residence in Prague, Simon Lacroix and his adoptive daughter Emiko argue over the fact that the girl hasn't had the chance to train with him since they left Seattle. Simon is busy with Outsiders business, despite the fact that he is in low standing with them, and the girl is well aware of that. Simon insists that soon they will choose him to lead the Arrow Clan. Emiko suggests that he should kill the other Outsiders, and take leadership of the entire organization, but Simon slaps her across the face, warning that if they ever heard her say a thing like that, it would be very bad.

After a difficult battle, Robert manages to loose an arrow into Kodiak's gut, causing the man to fall. Despite his father's pride, Oliver reaches down to grab Kodiak's shield, and clubs Robert over the head with it, to Shado's dismay. Coldly, Oliver suggests that she go to hell, and that she take Robert with her.

At the cathedral in Prague, the leader of the seven clans gathers the Outsiders together to explain that Kodiak has fallen, and the Green Arrow and Shado will soon be coming for them. Simon responds that he should have been sent instead of the Shield Clan, but Golgotha warns that without the totemic weapon of his clan, Lacroix has no voice with the Outsiders. Simon refuses to stand down, warning that there are still rebel clans who might ally with Oliver and Shado. Katana of the Sword Clan and John Butcher of the Axe Clan will be coming soon.

Dismissively, Golgotha orders Onyx of the Fist Clan to demonstrate her loyalty to the Spear Clan by killing Simon. To his dismay, she refuses, claiming that her clan is stronger than his, and that she will no longer be taking orders from him. Easily, she snaps his spear in two, and before he can grab up the remains to defend himself, Simon's arrow pierces his hand. Having waited a long time for this moment, he looses an arrow into Golgotha's head. The Outsiders would, from this point on, be united under his leadership. Despite having been told to stay home, Emiko grins at Simon's success, watching from the shadows.

Retrieved from "https://heykidscomics.fandom.com/wiki/Green_Arrow_Vol_5_28?oldid=1428481"
Community content is available under CC-BY-SA unless otherwise noted.