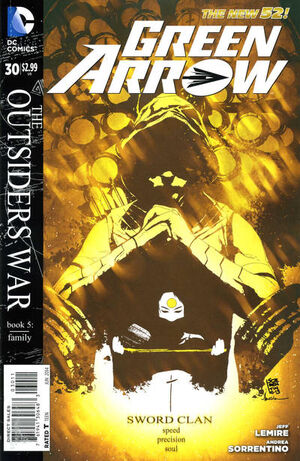 We spent our lives chasing this damn totem arrow, Simon. Well, here it is. I finally found it. And you know what? I-I guess it did bring enlightenment. Because now I know that all that's really important is to get my family back.

Outside the Cathedral in Prague, Green Arrow worries about how to approach breaking in. Komodo is inside, but his half-sister Emiko might also be in there, and if he simply rushes in, she could get hurt, when his priority is getting her out of the Cathedral safely. In any case, he doesn't know what to expect inside - it could be any number of members of the clans of the Outsiders. Regardless, he prepares to zip-line over from a neighbouring roof, intent on stopping Komodo, when a hand grabs him and pulls him back.

To his displeasure and surprise, Oliver discovers that he was followed by his father Robert and Shado. Somehow, they had got off of the island, and now they insist that he can't go in to face the Outsiders alone. Oliver insists that he will. He doesn't trust either of them. Robert responds that, angry as Oliver is, this is not just his fight. Emiko is his daughter, his company was taken from him, and attempts were made on his life and his son's. Komodo is his target, whether Oliver intends to join them or not.

The three of them crash through the stained glass windows of the cathedral, entering on a bizarre scene, as Robert demands his daughter back. On the floor lie the corpses of both Oliver Queen and Golgotha - but Oliver is alive and with Robert. Confused, Oliver demands to know who the corpse belongs to, and is disturbed to hear the corpse speak, ripping the arrow from it's brain, and announcing that the seventh totemic weapon has arrived: the mask. The man reveals himself to have been Magus in disguise. Disturbed, Onyx orders the loyal clans to kill all of the intruders as Komodo lies to Emiko that Shado and the others have come to kill her.

Seeing Komodo escaping with Emiko, Robert sends Shado to go after her, but she refuses to leave him again. Angrily, he tells her to go, as Magus spots Onyx making a break for it. He warns that whatever the Outsiders were planning, it must be stopped. While the rogue clans hold back the Outsiders' clans, Oliver abandons them to seek out Komodo while Katana chases Onyx.

Meanwhile, in Seattle, Count Vertigo receives a visit in prison from Richard Dragon. He explains that he has come to set Vertigo free. He runs Seattle now, and Vertigo will join him in the new order.

As they rush toward their rendezvous point, Emiko can stand no more confusions, and demands to know how Robert Queen could be alive after what Komodo had told her. She demands the truth. From behind her, bow raised, Shado suggests that it certainly is time for the truth. Both she and Komodo loose arrows at once. He dodges hers, but she takes his arrow in the shoulder.

Following his father, Oliver demands to know how he knows which way Shado and Komodo went. Robert reminds that the Outsiders were trying to launch a boat full of gas - so Komodo would be heading for water. Snidely, Oliver remarks that Robert might torture Emiko when he gets his long-lost daughter back, and Robert responds with anger. He punches his son in the jaw, warning that what's done is done. His actions had led Oliver to become the hero that he is today. From the ground, Oliver responds that what changed him for the better was not the island or the torture he underwent - it was his mother. She had faced her own death with dignity and grace, and her genuine desire to make things better had inspired him. Robert, meanwhile, had been completely absent while his wife was dying of cancer. For all Robert's globe-trotting adventures, Oliver doesn't believe in the power of the Green Arrow. Moira had taught Oliver love, and Robert had only taught him hate.

Shado's scream of pain draws their attention, and Oliver and Robert are soon caught up, with their own bows raised, while Emiko stands between her kidnapper-turned-father and her mother. Slyly, Komodo demands to know how Robert faked his own death. Perhaps it was with Magus' help. He warns that Magus of the Mask Clan cannot be trusted, and will surely take the Outsiders for himself, one day. Ignoring his baiting, Robert responds that after they both spent their lives chasing the totem Arrow, he had finally found it. Like it was rumoured, the totem weapon did bestow enlightenment on him, but the knowledge that it gave him was that he needed to get his family back.

At an impasse, it is down to Oliver to take the shot that will take down Komodo before he kills Shado. With tensions high, Emiko begs Komodo not to hurt her mother. Coldly, he responds that he will kill her, if only to keep her away from the Queens. Finally, Oliver looses his arrow as Komodo looses his. Oliver's shot pierces Komodo's shoulder, but Komodo's arrow pierces Robert Queen's heart, just as he leaps in front of Emiko to save her life.

Retrieved from "https://heykidscomics.fandom.com/wiki/Green_Arrow_Vol_5_30?oldid=1428483"
Community content is available under CC-BY-SA unless otherwise noted.