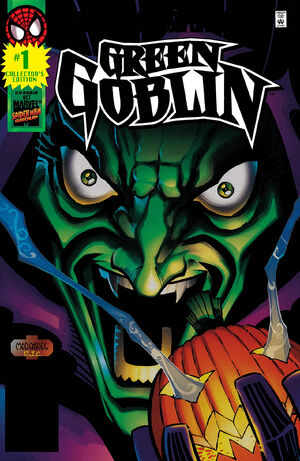 Oh, Man! This Goblin gig is a real rush... but it could also prove extremely hazardous to my health!

Appearing in "Enter the Green Goblin!"Edit

Synopsis for "Enter the Green Goblin!"Edit

Phill Urich was just fired from his work at a place called Kidd Video, so one of his buds, "Fast Freddie Glazer," gets some thugs to rob the place in retaliation. Phil doesn't approve of the group's actions, but out of pressure lies to incoming police, diverting their attention from the robbery. Out of gratitude "Ricko the Sicko," leader of the gang, gives Phil a ride and some of the stolen vids.

The next day Phil goes to the Daily Bugle as an intern under his uncle, Ben Urich. Ben has recently been working on the story surrounding the Osborn Family, titled Dynasty Of Evil, to which Phil comments on how dorky the Green Goblin costumes looked. At dinner his family is less than respectful about his career status, with the exception of his mother who believes he must still find himself.

Phil backtracks the deed to one of Harry Osborn's old warehouses, impressing his uncle Ben who wants to scour the place for incriminating evidence. When Phil sees Freddie later on in the street he confronts him about the incident earlier, and after a few words Phil reveals the location of the Goblin's old hideout. Phil heads over immediately when Freddie calls him about a score they've made.

He sees Ricko the Sicko and his thugs raiding the place, and to his horror, they find his Uncle Ben investigating the area. Phil manages to go unseen by cutting the power to the lights, leading his Uncle to safety unseen. Stumbling upon a switch, he enters Osborn's secret headquarters within the base, accidentally breaking a glass-chamber full of experimental Goblin Serum. The thugs find Ben despite his hiding place, and in order to save him Phil dons the Green Goblin costume & mask.

The mask grants Phil powers similar to the previous Goblins, using them to ward off the thugs. He leaves on the bat glider when the police arrive so as to avoid confusion; However he feels excited that he is now the new and improved heroic Green Goblin!

Retrieved from "https://heykidscomics.fandom.com/wiki/Green_Goblin_Vol_1_1?oldid=1710531"
Community content is available under CC-BY-SA unless otherwise noted.