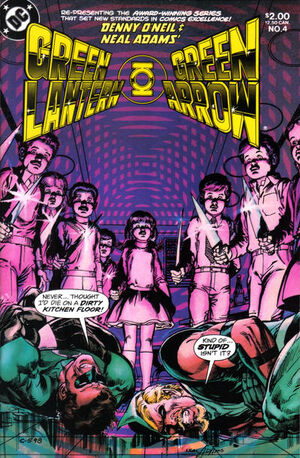 I've got a lot to say, and I'm not much good at speeches, so please don't interrupt me. When I saw, a little while ago, the strength of Green Arrow's love for Dinah, I realized that I've been denying myself that sort of strength... because I was proud, because I insisted on my own terms... because I demanded you accept me, not as the dashing Green Lantern, but as plain... Hal Jordan!

Appearing in "How Do You Fight A Nightmare?"Edit

Synopsis for "How Do You Fight A Nightmare?"Edit

This story is reprinted from Green Lantern Vol 2 #82.

Appearing in "And A Child Shall Destroy Them!"Edit

Synopsis for "And A Child Shall Destroy Them!"Edit

This story is reprinted from Green Lantern Vol 2 #83.

Retrieved from "https://heykidscomics.fandom.com/wiki/Green_Lantern/Green_Arrow_Vol_1_4?oldid=1516813"
Community content is available under CC-BY-SA unless otherwise noted.