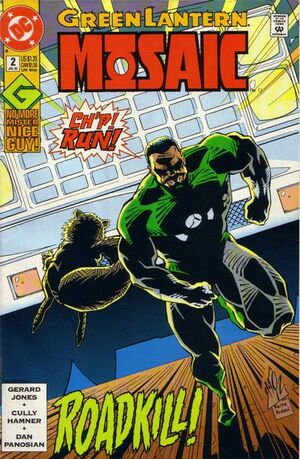 Glorious vehicles! What a world John is from! What power he takes for granted! And what a world he supervises. A miniature of the cosmos. A life's journey in every step.

On the planet H'lven, Ch'p dreams and remembers his past as a member of the Green Lantern Corps.
Meanwhile, on Oa, John Stewart awakes from yet another nightmare about something happening to the road he's built to connect each of the cities in the Mosaic. He finds himself waking from dreams, and being unable to return to sleep on a nightly basis, no matter what methods he tries. Instead of trying to sleep, John dons his Green Lantern uniform and patrols the road.
John plans to create peace in the Mosaic by using trade of goods and services in the same way that the system works on earth. However, this plan is dependent on his road. John arrives just in time to save a cargo truck from falling into a huge chasm right in the middle of the road. John is angered and confounded by the fact that no species currently living on Oa could cause such damage.
Ch'p watches as the other wake from their hibernation, and in their hunger, attack each other. Remembering his past as a Green Lantern, he disgustedly leaves his nest and trudges through the snow to the resting place of Salakk. Salakk has entered a state wherein he is barely conscious, and simply sits all day, recalling his glory days. Ch'p reveals that he was compelled to charge his Green Lantern Ring that morning, and discovered that there were new Lanterns in the Corps.
While inspecting the damage to his road, John Stewart is surprised to see Ch'p and Salakk arriving. Ch'p admits that his memory has been affected by his hibernation, and John recounts the story of the Guardians' abandonment of the Corps, the execution of Sinestro, his apparent return, the destruction of the Central Power Battery of Oa, and its subsequently being rebuilt. John indicates that while Ch'p was not selected by Hal Jordan to join the Corps, he could use Ch'p to help him look after the Mosaic, and protect the road.
While patrolling the road, Ch'p encounters a being of red energy, who blasts him. Ch'p fights back, but with little effect. He contacts John on his ring, but when John questions him about what he saw, Ch'p can't seem to say the words. Suddenly, a truck approaches, and in a panic, Ch'p is caught under its wheels. He manages only to tell John that he saw something red before dying, finally.

Retrieved from "https://heykidscomics.fandom.com/wiki/Green_Lantern:_Mosaic_Vol_1_2?oldid=1513350"
Community content is available under CC-BY-SA unless otherwise noted.