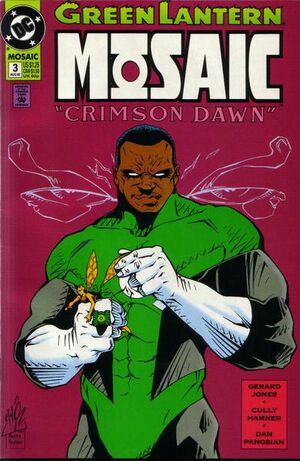 John Stewart attempts to have a private moment with Rose Hardin by flying her up high above the ground. However, he seems not to be himself, as when she asks him to put her down, he simply lets her plummet to the ground. Fortunately, he returns to his senses and catches her. When Rose says that she merely wanted to speak out of earshot from her son Toby, John attempts to strangle the boy. Once again, he returns to his senses before things go too far, but his apparent obsession with order is disturbing to Rose, who hopes that it is all simply the strain of looking after the Mosaic by himself.
Later, John tries to keep the peace after a group of kids attack a man preaching that Jesus is going to burn the aliens. Something within John changes, and he nearly kills one of the attackers until he catches himself, and vomits. Another incident arises when he stops an attack on some citizens rebuilding a roadway. Stewart is questioned by an amazon as to where he was earlier in the day. Having no memory of where he was, he probes his ring, but the ring refuses to respond.
Stewart is then pulled inside his own mind by the soul of Sinestro, who was absorbed into John's Green Lantern Ring when he reactivated the Central Power Battery of Oa. Sinestro taunts and tortures John, subjugating him. The spirit gains control over John Stewart's body, and wreaks havoc. He attacks the builders and flies off, assaulting the multitudes of life on the Mosaic world of Oa.
He hones in on Rose's house, forcing Rose up against a wall, and claiming that he's simply exerting a little control. She pleas for him to leave herself and her son Toby alone. Meanwhile, John, trapped inside his own mind, tries to regain control, to protect his friends. John imagines his friends in the Green Lantern Corps in his mind, and they provide him with the emotional support to weaken Sinestro's grasp. Finally, Toby attacks, and the weakened spirit leaves John's body, finally.
After explaining what had happened to Rose, she and her son regain their trust for him. Still, John is uncomfortable knowing that Sinestro's spirit is somewhere out there, lying in wait.

Retrieved from "https://heykidscomics.fandom.com/wiki/Green_Lantern:_Mosaic_Vol_1_3?oldid=1504893"
Community content is available under CC-BY-SA unless otherwise noted.