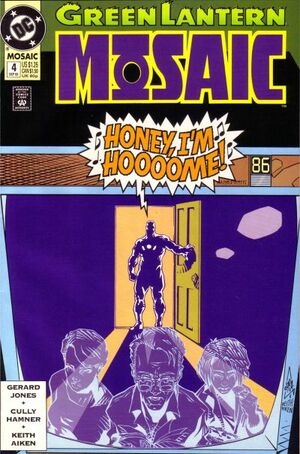 You've lost the earth-- lost your big, wide world-- for now. But you still have your community.

A boy named Frankie is disgusted with his parents' obsession with television. The parents have become so nostalgic for their home on earth that they spend all of their time watching taped reruns of old family sitcoms like Father Knows Best.
Frankie and his friends use their parents' neglect as an opportunity to seek out a rumoured city where only children exist, but in order to get there, they have to pass through other cities with dangerous alien residents. One night, the kids use the effects of a group of aliens called Feelgoods (who make those who touch them feel good) to give them the courage to go through the territory of a Stiffneck. Unfortunately, the Stiffneck wakes up, and it ends up mortally wounding a young boy named Shaffi.
John Stewart arrives on the scene, admonishing the children for undertaking such a dangerous activity, but when he discovers the dead boy, he is even more upset. He brings the boy back to his parents, but their despair at having been brought to the Mosaic in the first place overshadows any grief they might have had for their dead son. Instead of mourning their son, they simply watch more television.
Eventually, the parents begin having days-long television themed parties, and Frankie, seeing John Stewart out adventuring, decides that he and his friends should make another attempt to find the city of children. This time, they go around the Stiffneck's territory, and manage to make it to the city, despite being followed by some sinister looking creatures. Just as those creatures begin to attack, the children are transported away by the Green Lantern.
Once again, John chastises them for going out alone in the dangerous Mosaic. However, when the children explain their motivations, John is moved, saying he wishes more people shared their intentions. He gives each of the children Green Lantern Rings, so that they can transport themselves to the city of children (populated by a species that John calls Pans - after Peter Pan).

Retrieved from "https://heykidscomics.fandom.com/wiki/Green_Lantern:_Mosaic_Vol_1_4?oldid=1429282"
Community content is available under CC-BY-SA unless otherwise noted.