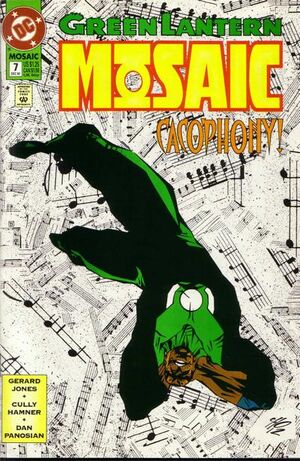 You're about to learn my number one rule... Never argue religion in my Mosaic!

A Native American Reserve on the Mosaic becomes consumed by a need to drum and dance. The activities draw the attention of Frankie and Kelly, who watch with interest for three days. Eventually, the music is interrupted by the creatures known as the Clergy-Birds, a meditative, philosophical species. The rhythms of the drums disrupts their meditation, and has the strange side-effect that the species known as Glad-Girls are killing the Clergy-Birds.
When the birds ask the Natives to stop, they are threatened with guns, and Frankie and Kelly are forced to use their Green Lantern Rings to intervene. They call John Stewart, who angrily warns them not to argue religion on his Mosaic. He grabs representatives from both parties, and takes them to see the Glad-Girls. When he arrives, he catches the girls in the act of killing one of the Clergy-Birds, but when he tries to catch them, they are gone.
When John encounters strange creatures he calls Twittering Machines dancing, he realizes that the source of the call for music is something other than the Native Reserve. He finds himself unable to control the urge to dance and sing. Fortunately, he is rescued by one of the Clergy-Birds, who have trained their minds to ignore rhythm. The source seems to be a field of reeds.
That night, John calls on the spirit of the Old Timer, who remains embedded in the Green Lantern's psyche. He begs the spirit to tell him about the music, but the Old Timer mocks him, and fills his mind with all the knowledge of a former Guardian. John is overwhelmed but tries to focus on pulling just one thing from the many.
The next morning, John calls on Frankie and his friends to watch his back, while he returns to the reed field. He assumes that there is some sentience that is creating the music. He enters the field and begins to sing. By letting the music into his mind, John encounters a race of beings made of sound that he calls the Tonemen. He dubs their home Melodyland. John begins a conversation with the Tonemen through lyrics and song which conveys the negative effects of the music.
The Tonemen stop urging the Natives to drum, and the Glad-Girls stop killing the Clergy-Birds, and everyone is in harmony again on the Mosaic.

Retrieved from "https://heykidscomics.fandom.com/wiki/Green_Lantern:_Mosaic_Vol_1_7?oldid=1429285"
Community content is available under CC-BY-SA unless otherwise noted.