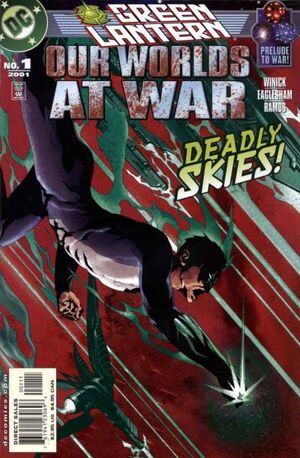 Superman asks Green Lantern to do something about the fact that Pluto is missing and messing with the gravitational fields of all the other planets in the solar system. He deals with the problem by dragging a number of asteroids to the place where Pluto should be, and molding them into a solid lump. Once he does so, he comes under attack from Sinestro. Initially, Sinestro has the upper hand, but Green Lantern soon realizes that something is 'off' about his opponent's energy constructs. He pours his all into ending the conflict, charging himself up with tremendous energy, but is interrupted by the appearance of Superman. Not impressed, Kyle zaps 'Superman', and both he and Sinestro, only hard light constructs, disappear.

Kyle wants to get to the bottom of the situation, but is warned off by Ganthet - and this really is Ganthet. He says that a great conflict is coming, and a great change has come upon Kyle, but that he should do nothing more here for the moment. Within the real Pluto, cloaked close to Green Lantern's new one, the planet's ruler expresses irritation at this new replacement orb.

Back on Earth, Kyle tells Jade that something strange has happened to his power. He demonstrates: he can use the ring to read a book on the other side of the room, or to create duplicates of himself. Basically, he's become able to do pretty much anything he tries to do, including things he's never been able to before.

Retrieved from "https://heykidscomics.fandom.com/wiki/Green_Lantern:_Our_Worlds_at_War_Vol_1_1?oldid=1682893"
Community content is available under CC-BY-SA unless otherwise noted.