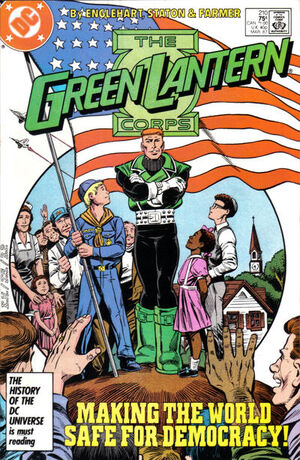 It's a cliche, Guy, but like Black Hand always says, cliche's are really folk wisdom -- and here's one that can't be repeated too often: war is hell!

The Soviets and the Americans are at red alert and tensions are running high when Guy Gardner attacks the Soviet Union after Kilowog, John Stewart, and Katma Tui consider joining the Russians. Unbeknownst to Kilowog, Stewart and Katma have been captured and drugged by the Russians and are scheduled to be terminated when the battery power on their rings wears out. Back in America, the rest of the Corps hears about Gardner's attack on Russia and they spring into action, hoping to avoid World War III.

Retrieved from "https://heykidscomics.fandom.com/wiki/Green_Lantern_Corps_Vol_1_210?oldid=1428623"
Community content is available under CC-BY-SA unless otherwise noted.