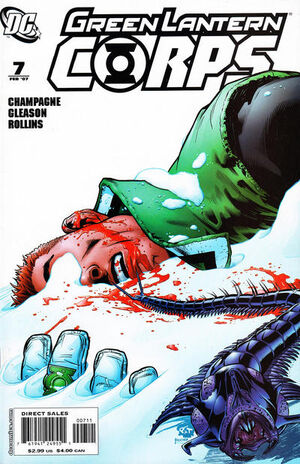 You've just been inducted into the coldest, hardest, meanest division of the Green Lantern Corps you never even knew existed. Can't handle it? Tough luck. You don't have a choice. We live in the places that are too dark for the light of the Corps. We handle the jobs that are too dirty for the Green. Welcome to the Corpse, Lanterns. Stay alive long enough, you might just save the universe.

Appearing in "The Dark Side of Green (Part I)"Edit

Synopsis for "The Dark Side of Green (Part I)"Edit

On the Dominator homeworld, one of the lower caste Dominators addresses his superiors concerning the Dominion's repeated failed attempts to conquer Earth. The elder Dominators listen as the lesser alien shows demonstrates an experiment he is performing upon a Khund.

Meanwhile, Guy Gardner and Green Lantern novice R'amey Holl travel to the frozen world of Corona Seven on a mission for the Guardians. They are to locate a man named Von Daggle. Landing on the planet, they burrow deep under ground until they discover Daggle's lair. Daggle is a shape-shifting Durlan however, and quickly gets the drop on both of them, relieving them of their Green Lantern rings. Guy tries to fight back, but Von Daggle transforms into a small flying creature and enters Guy's mouth. Wreaking havoc inside of his body, he causes Guy to fall over unconscious.

When Guy awakens, he finds R'amey and himself stranded on the icy surface of the planet. R'amey however seems unable to revive herself. Guy does his best to snap her out of her malaise and the two fly (courtesy of R'amey's natural wings) back down into the cavern. They come upon a strange alien, whom Guy presumes is Von Daggle. He quickly discovers however that the alien is actually R'amey wearing a dead animal's carcas draped over her limp form. The R'amey standing next to him is actually Von Daggle. Guy is itching to fight, but Von reveals that he needed to test Guy's fortitude. Guy soon learns that the Guardians sent him to this planet to team up with Von, not fight him. Von Daggle reveals that he is actually a deep undercover operative for the Green Lantern Corps. The Guardians of the Universe want Von and Guy to infiltrate the Dominator homeworld and stop them from using an arcane artifact which may actually spell their own doom.

Back on the Dominion homeworld, the lower caste Dominator uses radioactive elements from a piece of asteroid to gift Khund warriors with great power. It is his intent to create his own Khundian army completely subservient to the Dominators.

Retrieved from "https://heykidscomics.fandom.com/wiki/Green_Lantern_Corps_Vol_2_7?oldid=1428644"
Community content is available under CC-BY-SA unless otherwise noted.