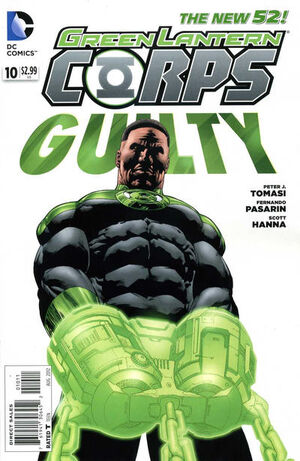 I'm not climbing up anything. I'm simply standing up for what I believe in and playing the hand that was dealt me.

John Stewart is sentenced to death for murder of Kirrt Kallak. The general assembly of Green Lantern Corpsmen is outraged, and Lantern Stewart is taken off to the Alpha Lantern's Alpha Tower for safe holding. Meanwhile, the ring of Sector 2541 continues to search for a replacement for Kirrt. It finds a likely candidate in Professor Lig Enak, but after a moment it terminates the recruitment initiation and speeds off.

Lantern Stewart makes a last request, and apologizes to Kirrt's family whom are understandably upset with him. At the Planetary Citadel, the Guardians of the Universe consult with the Alpha Lanterns regarding their judgement. Lantern Gardner also bears witness to the meeting. The Alpha Lanterns propose several ways to carry out the sentence, but an enraged Lantern Gardner feels that the Alphas need to perform the execution themselves. The Guardians concur.

Guy then carries out the other part of John's last request, and brings him his last meal. After a "jailbird philosopher" conversation, Guy busts John out of Alpha Tower, along with the help of Kilowog and several other lanterns. The Alpha Lanterns attempt to recapture Lantern Stewart, and a battle with the rogue corpsmen ensues. Against his wishes, Guy recharges John's ring. Kilowog and the rogues refuse to stand-down, so the Alpha Corspmen have no choice but to shut down their rings.

Retrieved from "https://heykidscomics.fandom.com/wiki/Green_Lantern_Corps_Vol_3_10?oldid=1428711"
Community content is available under CC-BY-SA unless otherwise noted.