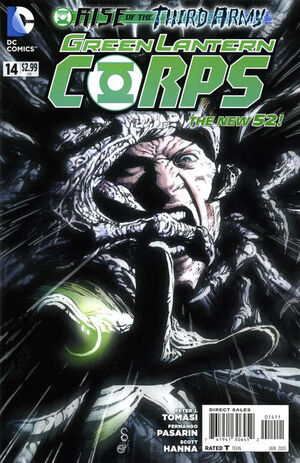 Putting us Earth Lanterns under the lights is getting to be a habit with you, huh?

Guy Gardner and his squad are under attack from The Third Army near Saturn, having just lost Vandor to their new adversaries. With the odds against them the Green Lanterns try to fight back but their valiant efforts are for naught as the Third Army continues their relentless attack while lightyears away the the Guardians watch the conflict untold through the eyes of their new army. One by one the Third Army literally disarm the Lanterns before assimilating them into their numbers, leaving only a sorrowful Guy Gardner standing. As Guy escapes the Guardians note that while their plan to have him eliminated has failed, it perhaps serves their cause more since they now have the ability to use him as an example and further destabilize the Corps. Xar is dispatched to Earth to kill Guy's family with the promise that he will eventually get to exact a more personal revenge on him once the Guardians are done with him. What the Guardians and Xar overlook is Guy's drive to protect his family and while he leads the Third Army away from Earth he has also used his ring to move his family to the Justice League satellite. On Oa, Kilowog questions Salaak about the thinning number of recruits he's been sent and when Salaak disputes the number the two Green Lanterns head to the foundry to discover that the Guardians have prevented rings from leaving Oa and finding new recruits. This leads to Salaak sharing his other discovery; that the Guardians are the ones who provided the damning and incomplete footage used as evidence of John Stewart's killing of Krrt to the Alpha Lanterns. The two decide to keep this information to themselves with Salaak noting that B'dg has been dispatched to Earth to find Hal Jordan. Meanwhile Fatality finds her way across the galaxy to join John Stewart, busy on his mission to find out what's been happening to the bits of Mogo floating about. The scene rapidly shifts back to Oa where Guy arrives to find himself being summoned immediately to the Guardians' citadel and warned by Salaak to prepare himself for a confrontation. Making the long walk to the Guardians Guy finds himself on the receiving end of a major comeuppance. The Guardians dress Guy down in cold fashion, blaming him for the deaths of his squad mates, abandoning his duty for personal reasons and then, to add insult to injury, for allowing fear to cloud his already questionable judgement. Making an example of Guy to the entire Corps the Guardians then reveal that Guys actions not only led to the deaths of his squad, but the deaths of the peace delegation he abandoned and the Green Lanterns he left behind to safeguard them. The murders threw that sector into upheaval, tainting the Corps reputation. The Guardians also add the charge of disobeying a direct order and call for Guy to resign his commission entirely and prostrate himself before the entire Green Lantern Corps. Guy does indeed resign and in a crack of green energy is sent back to Earth.

Retrieved from "https://heykidscomics.fandom.com/wiki/Green_Lantern_Corps_Vol_3_14?oldid=1428715"
Community content is available under CC-BY-SA unless otherwise noted.