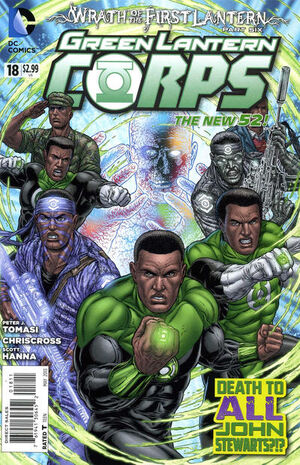 Appearing in "Wrath of the First Lantern, Part Six: Pieces of You"Edit

Synopsis for "Wrath of the First Lantern, Part Six: Pieces of You"Edit

The First Lantern messes with Lantern Stewart's mind, showing him a reality where he saves his mother from being killed. He brings-up Stewart's early disaster on Xanshi.[1] He manipulates Fatality, the last survivor of Xanshi, into killing Lantern Stewart and then being killed herself on the spear that impales him - a perfect end to their love/hate relationship.

The First Lantern again manipulates reality and John Stewart is now an Alpha Lantern. As an Alpha Lantern, he executes several Green Lanterns including Kilowog and Guy Gardner. Stewart's sacrifice of Mogo[2] is also altered so that now Kyle Rayner makes the killing shot. Finally, the First Lantern alters Stewart's execution of Lantern Kallak[3] is reversed, so it is Stewart that is the one about to cave and Lantern Kallak snaps Stewart's neck instead, all in an attempt to convince Green Lantern John Stewart that he should have killed himself after he failed to save Xanshi.

Retrieved from "https://heykidscomics.fandom.com/wiki/Green_Lantern_Corps_Vol_3_18?oldid=1428719"
Community content is available under CC-BY-SA unless otherwise noted.