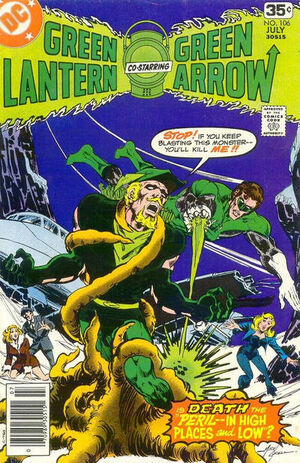 Sometimes I think Green Arrow is right! I do have too much respect for authority!

Appearing in "Panic... In High Places and Low"Edit

Synopsis for "Panic... In High Places and Low"Edit

Green Lantern has captured Sonar and is returning him to his home country of Modora for prosecution; however, when the Lantern enters Modorian space, the military begins firing on them, but quickly run out of ammunition. Green Lantern takes Sonar to the Modoran judge and tells of his recent crimes, but the case is dismissed as word against word; non-Modovan words are not considered equal. Green Lantern is then arrested for flying through Moldovan airspace without permission, and is taken to an old cell. There, Sonar lights some dynamite, claiming no one will find the old prison's collapse suspicious. Soon, however, Sonar returns to save him from an avalanche that recent military fire has started. Green Lantern demands (and receives) a written, full pardon in exchange for stopping the avalanche.

Meanwhile, a small jet and its crew/passengers - the pilot, the Miss Industry beauty pageant winner, Green Arrow and Black Canary - crash in the mountains. A tentacled blob attacks the four, forcing them to flee outside, where it teleports in front of them. As the monster approaches, Black Canary. Air Wave II appears after catching a stray radar signal to the area, but he is unsure what to do. Green Arrow returns, carries Black Canary to safety, and asks Air Wave to go for help. When the hero is unable to pick-up any signals on which he can ride, the beauty contest winner reveals a walkie-talkie her concerned boyfriend gave her. While the device only has a range of five miles, Air Wave departs and is able to find a stronger signal; he rides it to Paris, where he calls Carol Ferris.

While the two are talking, Green Lantern enters Carol's house after visiting Itty's grave and finding it empty. He flies to the rescue, bringing a load of calcium; the blob is actually Itty molting into a new form, and is trying to find a source of calcium to complete its metamorphosis. Last issue, it absorbed the calcium from Carol Ferris' foundation (according to Ray Palmer's analysis), and Green Lantern suspected it was trying to gain more from the skeletons of the jet passengers. Absorbing the calcium, Itty transforms into something vaguely humanoid, and disappears to travel among the stars.

Retrieved from "https://heykidscomics.fandom.com/wiki/Green_Lantern_Vol_2_106?oldid=1516799"
Community content is available under CC-BY-SA unless otherwise noted.