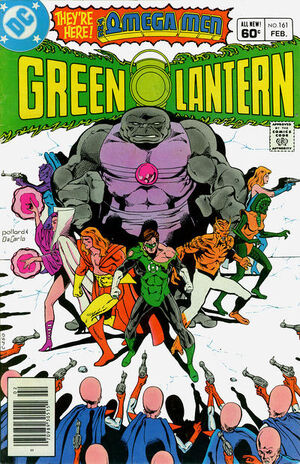 Appearing in "And They Shall Crush The Headmen!"Edit

Synopsis for "And They Shall Crush The Headmen!"Edit

As Harvid tends to his garden he notices a storm gathering. Suddenly a figure appears. Its Harvid's brother Ghanrik. Ghanrik is upset that he has finally been released from 100 years of solitary confinement in a Sciencell. Harvid, a retired Green Lantern, was the one that put him there. The two old men begin to fight while around them the storm gathers in strength. As they fight, the storm causes the dam to break. Too old and weak, neither man has the strength to fix it alone but together they are able to restore the dam. Finally, the exhausted brothers make peace and retire to Harvid's house for some wine.

Retrieved from "https://heykidscomics.fandom.com/wiki/Green_Lantern_Vol_2_161?oldid=1708613"
Community content is available under CC-BY-SA unless otherwise noted.