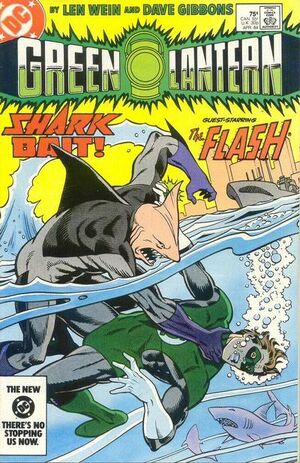 Congressman Jason Bloch is furious that Green Lantern has thwarted his latest plan to destroy Ferris Aircraft when he is visited by Mr. Smith who comes on behalf of Intercontinental Petroleum. He is there to persuade Bloch to cease or at least suspend his vendetta until Con-Trol (as the company is called) can conclude their business. Bloch refuses and secretly reviews his file that Green Lantern is Hal Jordan. Hal and Carol have breakfast when Hal reads about Flash's recent legal problems in the newspaper. He decides to visit Flash and encounters Flash in mid-battle with the Rainbow Raider. GL intervenes and the two capture the criminal. The Shark is traveling the streets of Coast City absorbing the minds of innocent people. Dr. Clay Kendall experiments with his experimental Psi-Chair hoping to tap into his mind's potential. While in the chair he briefly makes mental contact with the Shark. The Shark wonders if he should seek out this mind but opts instead to attack the local STAR Labs as it was their atomic radiation that forced the Shark's original form to undergo the massive evolution to his current state. GL enters the building and the two fight which ends up on the street with the Shark gaining the upper hand and absorbing GL's mind. The SWAT team open fire on the Shark but he flees when his mind begins to burn.

Retrieved from "https://heykidscomics.fandom.com/wiki/Green_Lantern_Vol_2_175?oldid=1428922"
Community content is available under CC-BY-SA unless otherwise noted.