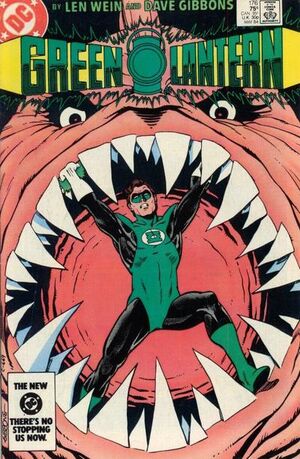 Green Lantern, in a coma-like state from his battle with Shark last issue, is taken to Mercy Hospital. Carol watches the news event in the company of friend/employee Tom Kalmaku. Meanwhile, inside the Shark's mind, GL meets the other victims all of which exist as solid images of themselves. Shark is toying with them before he completely eats them but GL's mental image still has access to his power ring's energy and can still manifest it. He uses that power to thwart the Shark's attempts at finishing him and the others off but his power ring is running low.

Meanwhile Congressman Block calls the Monitor (unaware that the call is being listened to by Mr. Smith of Con-Trol). Bloch is watching the news of GL's coma and wants to destroy Ferris Aircraft now while GL can't interfere. Monitor calls on the Demolition Team who are spread across the globe. At Ferris Aircraft Richard Davis and Bruce Gordon are discussing the new solar-engine powered jet. Richard experiences chest pain but dismisses it as gas. Bruce finds a threatening note under his blueprints and attributes it to Congressman Bloch.

Unsure how to help GL, Carol and Tom drive to Mercy Hospital and distract the guard long enough for Carol to sneak into his room and recharge Hal's ring thinking that might bring him out of his coma. Just as Shark is about to finish GL his ring bursts with energy and GL realizes this is a battle of will power. He floods the Shark's mind with green energy of high intensity forcing the Shark to expel all the uneaten minds and GL (along with everyone) regains conciousness. GL thanks Carol for her help then flies after the Shark who is now attacking a STAR vessel in the Pacific Ocean. The Shark is looking for more of the radioactive material that triggered his evolution when GL arrives.

Shark begins wrecking the ship and GL realizes it will soon explode. He asks Shark to drop his "invisible yellow" forcefield (which prevents him from using his ring's power) so he can pull him to safety. Shark doesn't believe GL and continues his rampage. The ship explodes and GL assumes Shark has died in the explosion. Meanwhile Congressman Bloch is waiting on a Los Angeles Pier to meet the people he hired through the Monitor. They arrive as The Demolition Team.

Retrieved from "https://heykidscomics.fandom.com/wiki/Green_Lantern_Vol_2_176?oldid=1450946"
Community content is available under CC-BY-SA unless otherwise noted.