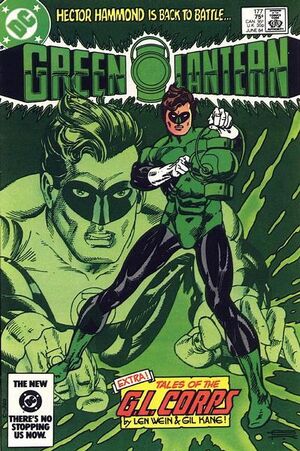 Appearing in "The Green That Got Away"Edit

Synopsis for "The Green That Got Away"Edit

Green Lantern rescues the crew from their exploding ship, dropping them off at a dock where reporter Tawny Young asks for an interview. Her questions prompt Green Lantern to remember a previous adventure.

Green Lantern chased some theives who stole a transport truck filled with antique cars. Green Lantern pursued, and caught a few released cars when his ring shorts out, and his power abruptly disappeared. He drove one of the cars, heading off the truck. He bluffed the driver into stopping, threatening them with his non-functioning ring. Soon after, the ring began working again. Green Lantern asked the ring what happened but the ring could not say. Green Lantern deduced that someone was stealing the energy and managed to get the ring to lead him to the culprit. Green Lantern enters the prison cell of Hector Hammond who revealed he has been tapping into the ring's power for months. With the energy, Hammond had been able to restore his mobility. He stole the rest of the ring's energy and used it to cause the wall to form a giant stone hand, grabbing Green Lantern. He mentioned that he had been using the energy to search for the meteor that caused his initial transformation, in hopes of evolving further into an unbeatable form. He left to continue his search. Green Lantern realized that the stone hand still contained green energy residue in order to hold its shape. He concentrated, commanding the energy to open the hand. He raced back to his power battery and recharged. He flew off after Hammond, encountering him in space. The two fought, and Green Lantern kept him busy until the 24-hour charge of the stolen energy ran out. Capturing Hammond, Hal returned him to prison.

His nostalgic moment subsides when Green Lantern spots an airplane about to crash which he rescues. Meanwhile, on Oa, the Guardians have been studying a threat - planet Omnicron Ceti IV's core is unstable and is about to explode. They decide they must summon Hal Jordan to combat the threat.

Kwo spends his last day as a Green Lantern. He visits Minos III and stops a train wreck. At Minos IV he stops an earthquake. He stops an invading force from Krodarr from attacking Vrygoth. He visits planet Elysium (formerly planet Bloodworld where he had once defeated tyrant K'runak K'ann) where he retrieves a lost kite for a small child. He redirects a meteor storm away from habited planet Balgus VI to a new water-covered planet making a small landmass. Then he flies to Oa where his ring is passed on to his successor.

Retrieved from "https://heykidscomics.fandom.com/wiki/Green_Lantern_Vol_2_177?oldid=1580174"
Community content is available under CC-BY-SA unless otherwise noted.