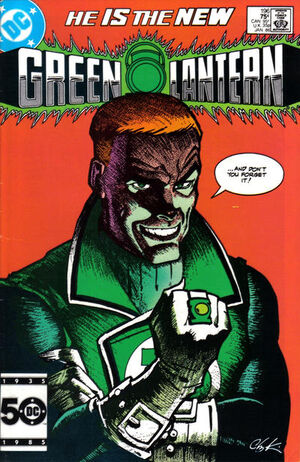 I am evolution at its utmost, meat! I am the survival of the fittest in every truth! I have the mind to mold reality to my will -- with all the instincts of a perfect carnivore! Now -- I feed!!

Having just been instated as the Green Lantern of Earth, Guy Gardner returns triumphantly visits his home town of Baltimore to tell it he hates it, and then continues on his new mission from the Guardians of the Universe. He has been commissioned to resurrect one of Green Lantern's deadliest enemies, the Shark.

Returning to Earth from his recent trip to Oa, Hal Jordan expresses frustration that he may never be a Green Lantern again, but instead decides to renew his enthusiasm for the rest of his life.

John Stewart returns to Earth to embrace Katma Tui after fighting in the Crisis, believing it to be over. Katma Tui wonders why if the Crisis is over, there is still an impenetrable barrier around Oa.

Restoring pieces of the Shark from the bottom of a body of water, Guy Gardner attempts to control him, and quickly finds himself fighting more than he had expected. The Shark outwits Gardner, a less experienced Green Lantern than his usual foe, Hal Jordan. Shark then goes looking for more challenging meat to feed upon.

Hal Jordan goes to see John Stewart in Stewart's apartment, and reveals to him that he was the previous Green Lantern. He then warns Stewart that Guy Gardner has become a Green Lantern, and has been sent on an unknown mission by one of the two Guardians' factions. While they're talking, the Shark leaps through the window intent on killing Hal Jordan. John Stewart faces off against Shark, and defeats him. Guy Gardner appears, and reveals that his mission is to assemble and launch a supervillain assault on the Anti-Monitor's birthplace on Qward. The two Lanterns quickly come into conflict, and prepare to fight it out.

Retrieved from "https://heykidscomics.fandom.com/wiki/Green_Lantern_Vol_2_196?oldid=1513314"
Community content is available under CC-BY-SA unless otherwise noted.