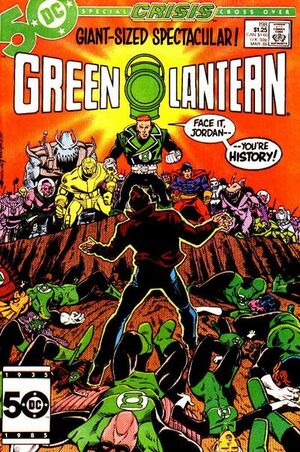 The lines between good and evil are blurred, when the fate of the universe is at stake.

Sinestro explains to John Stewart and Katma Tui that Hal Jordan and Guy Gardners mission to blow up the moon of Qward where the Anti-Monitor was born must be stopped at all costs. Using the displaced energy produced from contact between Green and Yellow energies, Stewart propels himself to Oa to confront the Guardians much faster than he would normally be able to.

Gardner and Jordan assemble the army of villains they've gathered on one of the moons of Pluto, preparing for their assault. The two discuss the grudge Gardner has against Jordan, and while Hal is actually glad to see Guy finally a Lantern, Guy calls him a jerk.

On Oa, Stewart arrives to find assembled remaining members of the Green Lantern Corps, including Tomar-Re, K'ryssma, Apros, Arisia Rrab, Ch'p and Xax. Although it is discovered that Sinestro had been lying to gain access to Oa, the danger he explained was very real, unbeknownst to him. The Central Power Battery, speaking through Tomar-Re explains that the destruction of the Anti-Monitor's birthplace will remove his tethers to the mortal world, and in effect make him much more powerful than he had ever been before. The Guardians launch a counter-strike composed of all active members of the Corps to stop Guy Gardner's team in the Antimatter Universe.

Gardner's team, which also consists of the Shark, Sonar, Goldface, Throttle and Blindside arrive in the Antimatter Universe and are attacked by the Weaponers of Qward. For disobeying orders, Gardner hits Jordan over the head and takes the ring he was temporarily given. Hal is able to survive by grabbing the life support systems of a nearby Weaponer.

When Gardner's villains and the rest of the Corps meet, they clash and there's a gigantic battle in the Antimatter Universe! During the fight, Xax is murdered and Tomar-Re is fatally injured by Goldface. As Gardner prepares to destroy the Anti-Monitors' birthplace, he is confronted by Stewart, the last man standing between him and the unintentional destruction of the universe. They engage in a battle of wills, and Stewart, the more experienced Lantern, wins with sheer power.

Elsewhere, as the Anti-Monitor dies, somehow all fighting are able to sense it, and the combat is ceased, while the fighters collect their dead and injured, simply glad that the Crisis is over. Tomar-Re dies, and his Ring is passed on to John Stewart, who is able to give the ring he's been using (originally the ring of Abin Sur back to Hal Jordan. Hal Jordan becomes an official Green Lantern once more.

Retrieved from "https://heykidscomics.fandom.com/wiki/Green_Lantern_Vol_2_198?oldid=1526609"
Community content is available under CC-BY-SA unless otherwise noted.