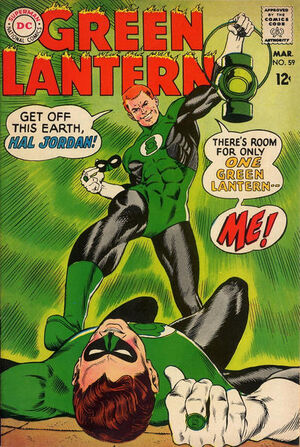 Appearing in "Earth's Other Green Lantern!"Edit

Synopsis for "Earth's Other Green Lantern!"Edit

On the planet Oa, the Guardians show Hal Jordan the Memory Machine, a device that records all the memories of the Green Lanterns for historical preservation. They then show the final moments of Abin Sur's life and how he happened to choose Hal Jordan as the most likely candidate to be his successor as Green Lantern. After, they also explain that Hal was the closest, as there was another person just as noble as Hal was that could have been selected. Intrigued by this, Hal is also told the Memory Machine could compute what would have happened if the other person was selected.

Viewing the situation, Hal learns that the next person is a physical education instructor from East City named Guy Gardener. Gardner becomes is selected to be the Green Lantern for Earth and much like Hal, busts up a ring of spies. Gardner would also tackle Hal's foes, Sonar, the Shark, Black Hand, Dr. Polaris and Sinestro. Later on a mission to a planet where the Yellow Plague killed off all the adults, Guy learns that the surviving children divided into two factions and have gone to war with each other with giant robots. Being used as a pawn at first, Guy manages to free himself and stop the on going struggle and convince the children of the planet to live in peace. Returning to Earth, Guy would soon fall victim to the Yellow Plague himself, and would summon Hal Jordan to take his place as Green Lantern.

With the story done, a curious Hal takes a business trip to East City to meet the real Guy Gardner, and the two become fast friends before Hal has to return to the west coast.

Retrieved from "https://heykidscomics.fandom.com/wiki/Green_Lantern_Vol_2_59?oldid=1428804"
Community content is available under CC-BY-SA unless otherwise noted.