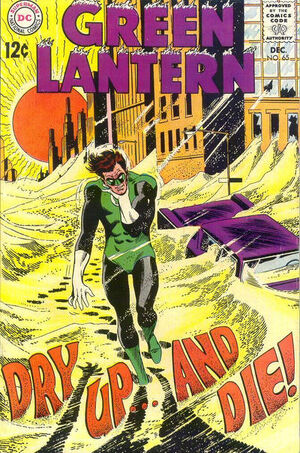 Dr. Neal Emerson is on expedition in northern Canada to learn the source of a strange magnetic source near the magnetic north pole. Calling down a crack in the ice he finds an alien energy source that begins to absorb the moisture in his body, and establish a telepathic link with him. Emerson realizes that the alien thing intends to absorb the entire planets moisture, turning the Earth into a lifeless wasteland. Realizing he has gained telepathic abilities due to his proximity to the creature he tries to summon the Green Lantern for help.

In Evergreen City, Hal Jordan receives the distress call, but only on a subconscious level, at first it manifests when he tries to endorse his paycheck and finds that he keeps on signing it with "Green Lantern" instead of "Hal Jordan." Later while driving, he feels the urge to put on his Green Lantern costume and go into action. Thinking it's because there are a group of thieves nearby, Hal tries to use his power ring on them but finds that it's not responding very well, and that it in fact wants him to go in the opposite direction of the crooks. The crooks try to take out Green Lantern with a bazooka and leave him for dead, unaware that his power ring prevented him from any mortal harm. Reviving he exerts even more will power to use his power ring to round up the crooks, having to rely on his quick thinking and extra will in order to do so. After rounding up the crooks Hal goes to visit his girlfriend Eve Doremus at her home and almost forgets to change out of his Green Lantern costume.

Back up north, Emerson realizes that his first attempt to call Green Lantern for help failed, and decides to resort to a more drastic plan: Using his telepathic powers, he creates a duplicate of his evil alter-ego, Dr. Polaris, and sends it out to attack the Green Lantern. It appears at the Doremus and attacking Hal in front of Eve, boasting about "his plan" to dehydrate the whole planet. Hal is defeated before he can act and evil Dr. Polaris duplicate leaves Hal for dead. Eve takes Hal back to her home where he is given medical attention. When he is finally left alone, he recharges his power ring and goes into action as Green Lantern and goes after Dr. Polaris. He finds Polaris flying above the Earth, there he easily defeats the evil duplicate and is finally contacted by the real Dr. Emerson. Travelling to the North, he saves Emerson and uses his power ring to rehydrate his reformed foe and destroys the device that threatens the Earth. With it's destruction, the Dr. Polaris duplicate vanishes.

Quickly returning to Eve's home, he changes back into Hal Jordan and comes downstairs, he realizes then that Eve didn't hear Dr. Polaris call him Green Lantern, because the Polaris duplicate only communicated telepathically, to Hal directly, and thus his secret identity is still protected.

Retrieved from "https://heykidscomics.fandom.com/wiki/Green_Lantern_Vol_2_65?oldid=1428810"
Community content is available under CC-BY-SA unless otherwise noted.