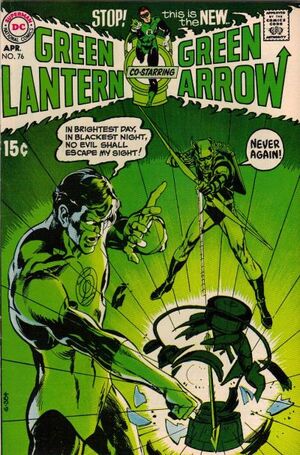 That's right, Lantern... apologize. Grovel in front of that walking mummy. You call yourself a hero! Chum, you don't even qualify as a man. You're no more than a puppet... and the Guardians pull your strings. Listen... forget about chasing around the galaxy! And remember America. It's a good country... beautiful... fertile... and terribly sick! There are children dying, honest people cowering in fear, disillusioned kids ripping up campuses. On the streets of Memphis a good black man died... and in Los Angeles, a good white man fell. Something is wrong. Something is killing us all! Some hideous moral cancer is rotting our very souls. [Addresses the Guardians, pointing an accusing finger] And you... sitting on your mudball, preening like a smug tomcat. How dare you presume to meddle in the affairs of humanity, when human beings are no more than statistics to you and your crew. [The Guardians ask Green Arrow how he would advise them] Come off your perch. Touch, taste, laugh, and cry! Learn where we're at... and why!

Appearing in "No Evil Shall Escape My Sight!"Edit

Synopsis for "No Evil Shall Escape My Sight!"Edit

Green Arrow helps to open Green Lantern's eyes to the modern-day problems in America, when he shows him the plight of the people living in the tenements of slumlord Jubal Slade. When the Guardians of the Universe observe GL roughing up Slade, they summon him to Oa where he is reprimanded. But against their orders GL returns to Earth and helps the district attorney collect enough evidence to put Slade away. Angry at his insubordination, the Guardians contact Green Lantern, but Green Arrow argues that there are serious problems across America that have previously escaped the attention of Green Lantern. The Guardians confer, and decide to send a representative to accompany Green Lantern and Green Arrow as they go on a journey of discovery.

Retrieved from "https://heykidscomics.fandom.com/wiki/Green_Lantern_Vol_2_76?oldid=1524405"
Community content is available under CC-BY-SA unless otherwise noted.