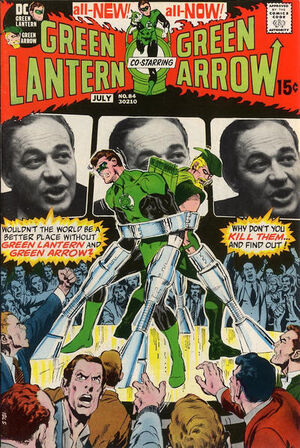 I suggest you surrender immediately. I'm in no mood.

Appearing in "Peril In Plastic"Edit

Synopsis for "Peril In Plastic"Edit

Green Lantern saves the company town of Piper’s Dell from disaster, not knowing it is controlled by his old enemy, Black Hand. Black Hand is involved in a scheme to brainwash the families around the nearby Plastics plant into becoming obedient zombies using drugs and psychological suggestion. He convinces the entire town that the disaster had not been averted, but started by Green Lantern. As the brainwashed townspeople try to lynch a depowered GL, Green Arrow arrives to help him, and the two thwart Black Hand's plans, encasing him in his own plastic. Afterwards, while Christmas shopping, Green Arrow makes an unambiguous remark about the evils of a plastic world, and the effect it has on our society.

Retrieved from "https://heykidscomics.fandom.com/wiki/Green_Lantern_Vol_2_84?oldid=1428829"
Community content is available under CC-BY-SA unless otherwise noted.