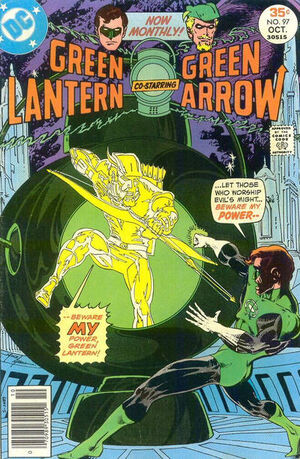 Appearing in "The Mystery of the Mocker"Edit

Synopsis for "The Mystery of the Mocker"Edit

An immortal Guardian has died on Oa amidst mocking laughter. The present Green Lanterns exit the building and spot an alien craft. The craft activates Vapor Drones (seemingly sentient cloud fighters) which engage the Green Lanterns. Deducing the clouds are taking orders from the ship, Hal Jordan smashes through the hull, but is immediately gassed and captured.

On Earth, Green Arrow and Black Canary watch over an injured and sleeping Katma Tui. Carol returns with a doctor. As they take Katma to his car, the group is attacked by Junior Musto, son of terrorist Musta Musto, who are looking to kidnap Carol Ferris. The heroes capture them but, in the confusion, Katma apparently wanders off.

Back on Oa, the aliens take the captured Hal Jordan to a mothership, planning to connect him to an Analyzerum machine to discover how the Green Lanterns are able to resist the Vapor Drones and how they discovered the spy Guardian (the one who died). Hal attacks, destroying the machine while admitting he faked unconciousness in order to learn the aliens' intentions. Hal asks the aliens how they managed to circumvent Oa's force field but they state they encountered no such obstacle. One alien signals a sister ship to bomb Oa with cobalt bombs. Hal leaves and engages the ship which fires a missile at him, which Hal deflects back at the ship destroying it. Hal goes to the Central Power Battery to recharge. An image of Green Arrow appears from the battery and attacks Hal but he defeats it. He then meets The Mocker, hiding within the battery, who admits he removed the force field. He then teleports Hal back to Earth.

Retrieved from "https://heykidscomics.fandom.com/wiki/Green_Lantern_Vol_2_97?oldid=1428842"
Community content is available under CC-BY-SA unless otherwise noted.