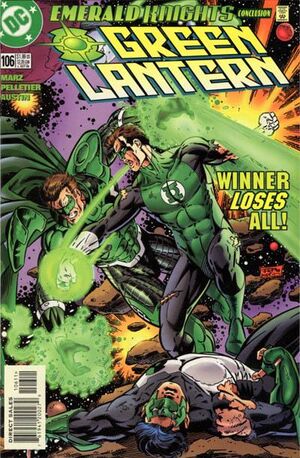 I don't understand how both of us can be here. But if going back means there's a chance I'll turn into you, Parallax... And do those terrible things you did...I won't let it happen.

The story continues from the previous issue, where we see Parallax fighting against his younger counterpart on the Earth's Moon, with the current Green Lantern Kyle Rayner knocked out after battling Parallax in the previous issue. Despite the fact that Parallax has infinite power, Hal Jordan is beating his counterpart furiously, by smashing him into the side of the mountain and into the ground. Hal doesn't believe that Parallax is him, but Parallax tells him otherwise. He tells Hal that he's from the future. He was traveling the the time stream when he felt a disturbance, which was Hal, because he doesn't belong in this time. The reason he's here in the present is to return Hal to the past, so that history can continue the course that it has already travelled on in the present time. Hal knows everything that will happen to him, after being told about it by Kyle, and blasts Parallax.

After knocking Parallax out, Hal goes to Kyle to help him up, but when he looks up, he sees Parallax standing before him, about to use his powers. There's a big flash of emerald energy, and we then see the three Green Lanterns in Coast City. Parallax tells Hal that he has frozen time to the point just before it was destroyed by Mongul in the Reign of the Supermen storyline. The reason Parallax brought the two of them into the past was for a couple of reasons. He wanted to show Hal exactly what happened to Coast City, that drove him mad and when he became Parallax. The reason why he brought Kyle along was because he didn't want him involving anyone else in the situation. Essentially, it concerns no one but the two Hals. Parallax shows Hal around the city in that moment before it was destroyed. Parallax tells Hal that time will unravel itself if he doesn't go back in time to the era where he belongs. But, if he stays in the present, he is guaranteeing that he won't become Parallax, which means that he won't be able to undo what has happened, including the destruction of Coast City. However, Hal doesn't believe him, saying that he doesn't want to become him, and that he would rather become someone else than Parallax. The older Hal accepts the younger Hal's point, and both men decide that they will have to fight each other to settle the situation. So, Parallax blasts Hal into a window, but Hal knows that Parallax can't kill him, but that's not Parallax's intent. He wants to send Hal back, but even if he succeeds, Hal will have the knowledge to prevent himself from becoming Parallax. Parallax then bashes Hal again, reminding him of his best friend Barry's death, and how he can fix everything. But, Hal reveals to Parallax that Green Arrow is dead, which stops Parallax long enough for Hal to blast him with a construct of one of Green Arrow's Trick Arrows. Parallax manages to bind Hal up, saying that he has to destroy everything in order to fix everything that's happened, but Hal breaks free, declaring that he will stop him. Hal blasts Parallax into a pillar, saying that it's not his decision to fix everything, because he's only a man, and he's trying to act like God, but Parallax tells him that if no one else will do it, why shouldn't he. Then, they are both struck by a beam, sent by Kyle telling them to stop.

Parallax reminds Kyle that it's none of his business. But, Kyle reminds him that it is his business because he's Green Lantern. He tells them that both of them have to return to their proper times. He tells Hal that he must return to his time, he must become Parallax, or else it could mean the destruction of Earth, literally. Hal tells him that he doesn't want to become Parallax and is about to strike his older counterpart, but Kyle manages to stop him before he can do it. He then tells Parallax that he will fail in his efforts right now to restructure time, but in his future, he will save the Earth when the Sun is extinguished, and sacrifice his life for the planet. He tells Hal that despite his desire to keep Hal in the present to help him adjust in his role as Green Lantern, the world needs him to go back. Hal tells him that he can't go back knowing his future, but Kyle tells him that he can, with his Green Lantern Ring.

For some unknown reason, Hal's ring has been able to do things Kyle's cannot. Kyle tells Hal that perhaps, his ring can erase his knowledge of the future, and Parallax can do the same as well for his future. Kyle tells both of them that the present hasn't unravelled yet, which means that there's still time for the both of them to return to their past and future respectively, and that there's no other choice. Hal agrees and gives Kyle a hug, saying that he's glad that Kyle is continuing the tradition of the Green Lantern, but he's still amazed at his older counterpart, hardly believing the actions that Parallax has committed and what he will commit in his future, but Parallax tells him that he will...one day. The three Green Lanterns then combine their powers, and they disappear, just as Coast City is destroyed, exactly the same way as it did in the past.

We then see Parallax knocking Superman out with one punch, as he's restructuring time. We then see Hal battling Sinestro. Hal eventually defeats Sinestro by destroying his Yellow Power Ring, and reminds him whose power ring is stronger.