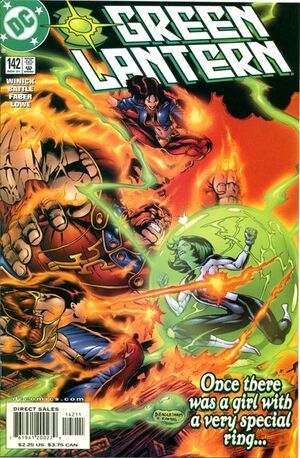 Be prepared. It is coming. Make yourself whole.

The story continues from the previous issue. We see Green Lantern Kyle Rayner flying through space, deep in thought. As he is flying through space, he passes by a giant rock on fire. Surprisingly, this causes Green Lantern great pain, and we realize that this is just a hallucination. We see Green Lantern on the ground in tremendous pain as a fire is raging on behind him. He tries to get up, but the pain is too great for him. The reason why is because his girlfriend Jade is fighting against the group called Inferno by herself. The battle between Jade and the group is causing massive damage throughout the streets of New York City. She's wondering why they are setting fire to the buildings, but they tell her that they are doing the world a service.

Meanwhile, Kyle continues to try to heal himself, he then hears a voice. When he looks up, he sees Hal Jordan, as the Spectre. Hal tells Kyle that he's concentrating too much. Meanwhile, at the Slab, we see former Green Lantern John Stewart talking to an inmate at the prison, it's Fatality. She wonders why he's visiting her so often, considering that he was there just last week. He tells her that they need to talk. But she tells him that she knows the reason why he's there at the prison. He's trying to figure out if she knows how to heal his legs, after they were broken by Grayven. She decides to make a deal with him: if he takes his clothes off, she'll tell him what she knows. He immediately throws the deal right back at her. As John starts to leave, Fatality tells him to only take off his jacket and shirt. After joking about how well he's taken care of his body, John goes into a rage, telling her that she's embarrassed and humiliated him enough, and to just get straight to the point. She then tells him that the reason why she wanted him to take off his jacket and shirt was that they were blocking her sight. She tells him that she has a special ability that allows her to see injuries in the body. She reminds him that he has some damaged vertebrae that paralyzed him below the waist. But, she tells him that he doesn't have that injury anymore, and that the reason why he cannot walk is because it is all in his head.

Meanwhile, back in Manhattan, Jade continues to fight against the trio. Despite being outnumbered three to one, Jade is managing to hold her own against the group for a while. Nearby, Kyle talks with Hal, who tells him that he needs to make himself whole, and not just the injuries that he's sustained in the battle against the Inferno group. He then warns Green Lantern that something is coming and that he should be prepared, to make himself whole, and then disappears. Kyle then uses his ring to not only heal his injuries, but recreate his uniform, as Jade continues the fight against the trio. Jade then encases one of them in a box, who uses her powers to try and break out, but because the oxygen has been cut off, she kills herself and dies from her injuries. The other two members try to run away, but Jade encases them in boxes as well, telling them that there's something familiar about them, and tells them to reveal to her the location of a certain person. Just then, Kyle comes in and asks Jade what she means and who she's looking for. Jade then takes him and the others underground to a room, where they find Martin Van Wyck, better known as Effigy. They both recognize each other, with Jade and Kyle realizing that Effigy has suffered a psychotic breakdown. His schizophrenia had manifested through his powers, with the creation of three independent pyrokinetic characters calling themselves Torch, Blaze and Ember. Jade and Rayner defeated the three aspects and Effigy agreed to return to prison.

Afterwards, they are seen sitting on top of the Brooklyn Bridge, talking about how the battle ended. Jade asks Kyle how he managed to heal himself, considering that he had third degree burns all over his back, and that he was going into shock, considering that it's outside his abilities. Kyle tells her that physically, he's fine, but Jade senses that he's nervous, but Kyle doesn't know why, but that he's never been so scared in his life before.

Retrieved from "https://heykidscomics.fandom.com/wiki/Green_Lantern_Vol_3_142?oldid=1429085"
Community content is available under CC-BY-SA unless otherwise noted.