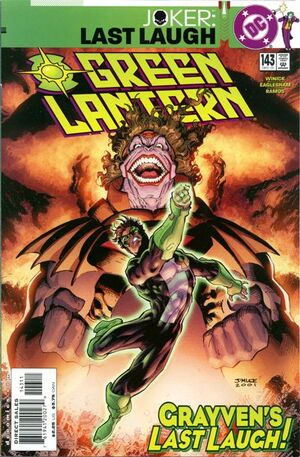 Appearing in "I'm Here All Week, Make Sure to Take Care of Your Waitresses."Edit

Synopsis for "I'm Here All Week, Make Sure to Take Care of Your Waitresses."Edit

The story begins in a flashback to a place somewhere in Europe. There was a small village in Eastern Europe during the Cold War. Outside of the village, there was a forest. At first, a few elderly farmers began to disappear, but a short time later, children as well began to vanish. No one knows what evil resides in the forest, only that the monsters that live there are yellow. Then, we see Alexander Nero in yellow chains, being commanded by yellow monsters, who want Nero to bring more people to them so that they can feed. He tries to convince them that he will bring them more, but the monsters don't believe him, and they start whipping him. It is then revealed that these monsters are constructs, constructs created by Alex's ring.

The scene then jumps to New York City, where we see Green Lantern Kyle Rayner and Jade at the Statue of Liberty, which has been defaced with the smile of the Joker over the face of the statue. Jade thinks that the Joker is behind the vandalism on the statue, but Kyle thinks otherwise. The smile is just not funny, which means that the Joker couldn't have done it. Instead, he believes that it must have been one of the Jokerized villains. They then combine their powers to fix the statue back to its normal image.

Meanwhile, we see a bookstore, where we see Grayven, the purported son of Darkseid, who has been jokerized, reading books about jokes. The scene then cuts to Kyle talking to his assistant Terry Berg as they talk about Kyle's work as a comic book artist. Terry is sad for some unknown reason, so Kyle asks him what's wrong. Terry reveals to Kyle that he's gay, and that his mother asked him if he was. Instead of saying no, Terry told his mother that he is gay. Kyle is undoubtedly surprised at the revelation. He tells Kyle that his mother cried for an hour and that his father tried to kick him out of the house, but only did so in his anger and allowed him to come back in the house. Terry is furious that parents would throw their own kids out on to the streets just because they're gay, and that his parents just don't talk to him anymore. However, despite his parents finding out his secret, he's okay, just a little down, but okay.

We see, somewhere else in New York City, a guy named Ronald Peltz going into a club. It's a comedy club, his comedy club. However, Ronnie isn't funny at all and that despite his attempts, he hasn't given up. As he's setting up everything, he goes into the back room and finds a mysterious generator lying in the middle of the room. Suddenly, there's an explosion that destroys the entire club. It is revealed that in that one night, every comedy club in the city was blown up within five minutes of each other. It was just before someone's comedy debut. Even though that guy didn't make it out there, we see that he has been grafted on to the wall in his dressing room, meaning that someone else is running his show: it's Grayven.

Holding the entire audience hostage, Grayven tells the audience jokes that aren't funny at all. Just as Grayven is about to tell his next joke, Green Lantern pulls him off the stage, telling him that his show is over. However, Grayven responds by unleashing his Omega Beams on him, which causes a big explosion that destroys the entire backstage area. As Kyle and Grayven battle each other on the rooftops, Jade tries to get the crowd to calm down. She calls Kyle and tells him that they have a problem. Apparently, all the doors are wired, they have been booby-trapped. Kyle tells her to see if the wires lead anywhere, to which Grayven tells them that they lead to a bomb in the basement. The bomb is made out of the best demolition technology from Apokolips, meaning that it's a bomb in the 100 megaton range.

At that moment, Kyle powers up, and realizes that in the past year since he got the Green Lantern Ring, he has been going through some changes, such as his ring not needing to be recharged, and the increase in his power. He defeats Grayven and encases him in a block. He then races into the theater and finds the bomb: a neutron bomb, capable of destroying the entire city. Remembering what happened when his predecessor Hal Jordan lost his city, Kyle takes the bomb into the sky with Jade watching. After going half a mile into the sky, he realizes that even at this height, it'll still destroy the city. So, he decides to contain the explosion, even if it kills him. The explosion is so loud and large that it's heard in six states, and is seen all over the world. Kyle is then seen absorbing the energy from the explosion.

Since Kyle got the ring of the Green Lantern, he has noticed over the last year that the power has been fueling him. He was unaware that it was his to claim, but the power sought him out, it quietly joined with the power of Parallax after the sun was reignited. Meanwhile, Nero sees the explosion, and realizes his destiny, that he is the one who will claim the power, as Kyle calls out Oblivion's name. To be continued in the next issue.

Retrieved from "https://heykidscomics.fandom.com/wiki/Green_Lantern_Vol_3_143?oldid=1429086"
Community content is available under CC-BY-SA unless otherwise noted.