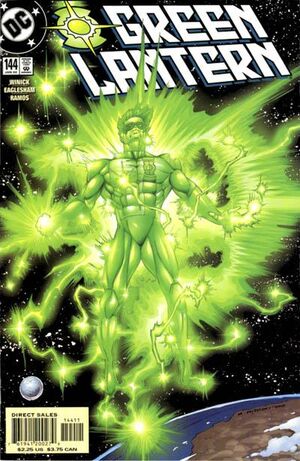 Appearing in "The Battle of Fire and Light"Edit

Synopsis for "The Battle of Fire and Light"Edit

The issue begins with a young boy telling his mother about a green dot in the sun. The mother then goes outside the house and looks at the sun, and notices the green dot in the sun, thinking that the world is about to end. However, the world is not ending. In fact, the cause of the green dot in the sun is not some strange phenomenon. Actually, it's the actions of Kyle Rayner: Green Lantern. We then see Kyle in the sun surrounded by green energy. His girlfriend, Jade is trying to get his attention, but all he does is look at her. She thinks that he's absorbing the energy that Grayven had unleashed by exploding a neutron bomb.

Unfortunately, he cannot hear her as he's trying to figure out where he is. Jade tries to get close to Kyle, but the energy surrounding Green Lantern is too strong for her to pierce through. We then hear him thinking that he's going to need help and thinks about trying to get help from the JLA or even John Stewart. He manages, somehow, to tell Jade to go find John Stewart.

Meanwhile, John Stewart is looking at the sun through a shoe box trying to figure out what's going on with the sun. He believes that the phenomenon is not being caused by something organic. However, he hopes that whatever is happening to the sun is not some anomaly that's going to affect Earth's population. His girlfriend, Merayn, tells John that they have a visitor: it's Jade, somehow she transported there.

Meanwhile, Kyle notices a figure coming towards him. At first, he sees Oblivion, then he sees Hal Jordan as Parallax, but he's wrong. As Jade and Alan are watching, they come up with a plan. If Jade can get Kyle's attention, Alan can use his ring to shield her as much as possible, and even try to add some strength to her own ring. Suddenly, Jade's ring is fully recharged, and Alan even feels it himself. They realize that Kyle's been lost inside whatever he's become and that Jade's voice is the only thing that can remind Kyle who he is and bring him back.

As that's happening, Kyle tries to remember what had happened. He remembered Grayven turning into something like the Joker. He exploded a bomb and then he remembers the power, when suddenly, he hears Jade's voice and tries to call back to her. We then see Jade being pulled between Alan and the energy surrounding Kyle. She tells him that he needs to stop what's going on before everyone is killed. Alan tells him to try to find Jade and see her. At first, he cannot see her, but then he sees her image and apologizes to her for the upsurge in energy and tells them all that he's got it under control. John then asks Kyle what is going on, but Kyle just tells him that everything's fine.

As the group are trying to find out what is going on between Kyle and Oblivion, Kyle tells them the origin of Oblivion. He tells them that Oblivion never really existed, he was an inadvertent construct of Kyle's subconscious, representing his fears and anxiety. However, once Kyle destroyed Oblivion, the power that created the monster had to go somewhere. That power sought out the energy of the Green Lantern, and it found Parallax. When Hal reignited the sun, he left some residue of Parallax's power, a small amount though, but it was enough to draw the energy of Oblivion to it. Despite the fact that Kyle was constantly using the energy of the Green Lantern ring, it never decreased, in fact, it grew larger, allowing for Kyle to absorb more energy, gaining more power. Because of that energy, Kyle has not needed to recharge his ring, but it also allowed him to create constructs that were more powerful than even himself. Since the power of Oblivion met with the power of Parallax, they grew, and the source of that power is what Kyle has been tapping into, unimaginable power, and that he's going to claim it because he's supposed to.

Before he can tell everyone that it is his destiny, he realizes that someone else feels that power too, and so does John: it's Alexander Nero, and he seeks to claim it as well. Since Alex's ring once belonged to Sinestro, it is powered by the stolen energy of the Green Lantern ring, and since Kyle as a conduit, the power Nero has is unimaginable, with the major difference between the two ring bearers is that Kyle uses the energy to be a hero, while Nero seeks to use that power to remake reality in his own image. Hearing the potential power that Nero can claim, Jade tries to get her father to go with her and help Kyle out, but Alan tells her that they are not strong enough to stop Nero and that Kyle has to do this on his own.

Meanwhile in space, Nero notices Green Lantern heading his way, and after exchanging small talk with Kyle, they both realize that the only way to claim the entire power, they have to battle this out the hard way.

Retrieved from "https://heykidscomics.fandom.com/wiki/Green_Lantern_Vol_3_144?oldid=1429087"
Community content is available under CC-BY-SA unless otherwise noted.