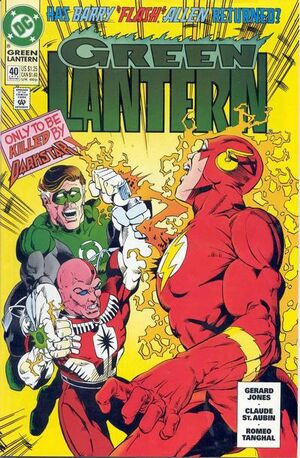 Appearing in "A Flash of Evil"Edit

Synopsis for "A Flash of Evil"Edit

Green Lantern arrives in Central City to see his old friend Barry Allen - the recently resurrected Flash - being attacked by a Darkstar. The Darkstar claims to be part of an intergalactic police force, similar to the Green Lantern Corps, and that Barry's actions threaten the safety of the planet earth. Hal is disbelieving, and attacks - but their tussle gives Flash the opportunity to escape.
Before Hal can pursue or find out why Barry seems to be attacking Central City, he receives a transmission on his Green Lantern Ring from Carol Ferris, having set it up to spy on her to make sure she didn't become a Star Sapphire again. Recently, she had been showing signs of losing her self-control, but he had been called away to look into Barry's reappearance.
Hal manages to find Barry before the Darkstar does, hoping to speak some reason to him. Barry heads into the Flash Museum and when Hal gets inside, he finds all of its patrons and Dexter, the curator, filing out after Barry had apparently threatened them with death. Barry confronts Hal, claiming that Central City has abandoned his memory, despite the museum. Hal hopes to resolve things without a fight, but it becomes all too clear that Barry is trying to kill him.
Hal attempts to pin his friend against a wall, but forgets that Barry can vibrate through walls. Barry escapes into the Rogues' weapons room, where he uses each of their weapons against Hal, culminating in a poison gas top from The Top's arsenal. Unfortunately, Hal realizes that Dexter is still in the building, who believes that if the museum dies, so must he. Hal gives him Mister Element's gas-mask.
Hal struggles to keep up with Barry's flurry of attacks and abilities until the Darkstar catches up to them. Once again, Hal's attempts to keep the Darkstar from apprehending Barry allows his apparently berserk friend to escape. As Flash zooms out of the building, Darkstar follows, sending a tremendous blast after him. Hal sees the crater, and finding no body assumes that Darkstar has killed Barry. The Darkstar denies it, but their altercation is interrupted by another transmission showing that Carol has become possessed by something sinister.
Hal tells the Darkstar to leave, but he demands answers to questions about the Mosaic on Oa. Hal refuses to give answers, and the Darkstar flies off, vowing to get the better of these uncooperative Green Lanterns. Meanwhile, the flash rises from beneath a pile of rocks in the crater, having tricked his pursuers into thinking he was killed.
Hal returns to Ferris Aircraft to check on Carol. She begs him to remove the entity from inside of her, knowing it will put more blood on her hands. She warns that it is not Star Sapphire inside of her, and soon, Predator springs out.

Retrieved from "https://heykidscomics.fandom.com/wiki/Green_Lantern_Vol_3_40?oldid=1504857"
Community content is available under CC-BY-SA unless otherwise noted.