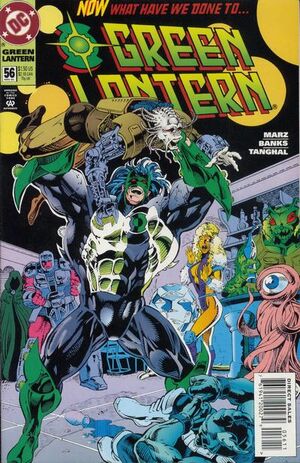 See what happens when you guys make me angry? I get big, green and mean -- no, wait. I've got me confused with somebody else. Never mind.

Appearing in "Last of the Breed"Edit

Synopsis for "Last of the Breed"Edit

Kyle finds himself on an unknown planet, asking for directions, trying to find his way back to Earth, when he meets Adara, a former Green Lantern. She tells him that she was in space when everything went down and lost her power. Kyle is attracted to her, and they fall asleep. When he wakes up, his ring is gone having been taken by Adara. He finds her though, and she tells him that it doesn't work for her, and she almost got herself killed trying to be a hero again. She gives him the ring back and tells him to please, just go. He turns to leave, and she kills herself with her gun. Kyle flies off, and shortly is intercepted by a space cruiser.

Retrieved from "https://heykidscomics.fandom.com/wiki/Green_Lantern_Vol_3_56?oldid=1511869"
Community content is available under CC-BY-SA unless otherwise noted.