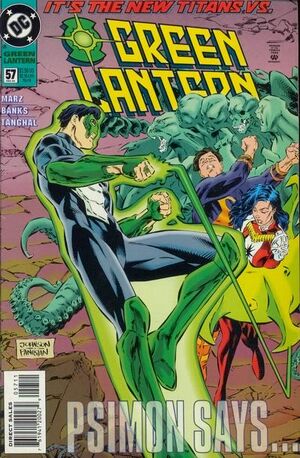 When Kyle first arrives in New York City, he's moving to his new address at 175 Bleecker Street in Greenwich Village. On his way there, he encounters a bald Asian man, who tells him that he will show him to the address, but he might find the neighborhood a bit "strange." The scene is a nod to Marvel Comics character Doctor Strange, whose mansion is located at 177A Bleecker Street. The bald Asian man is supposed to be Strange's servant Wong. Considering the soon-to-follow DC/Marvel crossovers, which started with Green Lantern Silver Surfer: Unholy Alliances and later revealed Doctor Strange to be an important player in All Access #3, this could be interpreted as more than a mere tongue-in-cheek nod, as Ron Marz wrote all of these stories.

Retrieved from "https://heykidscomics.fandom.com/wiki/Green_Lantern_Vol_3_57?oldid=1692974"
Community content is available under CC-BY-SA unless otherwise noted.