Part of the 'Origins and Omens' event 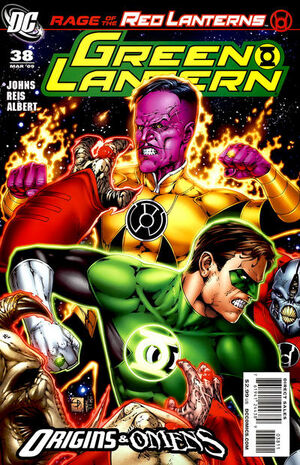 Appearing in "Rage of the Red Lanterns IV"Edit

Synopsis for "Rage of the Red Lanterns IV"Edit

Synopsis for "Origins and Omens"Edit

On Oa, Scar looks into the Book of the Black, and sees the lives of Hal Jordan and John Stewart.

At the remains of Xanshi, John Stewart is looking through a green construct sniper rifle at the debris when he's contacted by Guy Gardner. John insists that he's on Earth, but Guy knows where he really is, saying he always goes there after a huge battle, like the recent fight with the Orange Lantern Corps, and asks why John keeps going there. Everyone else has moved on. As John looks through the field, he sees Fatality in a Star Sapphire uniform and departs.

At Coast City, Hal Jordan speaks with Tom Kalmaku on Carol's recent flight in his plane. Tom explains how Carol didn't explain how the hole in the window appeared, but that she just walked off without a word, without the usual smile she has after a flight. Hal assumes that she just needs some time alone, but Tom says that Carol spends all her time alone.

On Zamaron, however, Carol Ferris is hardly alone—she's charging a Star Sapphire Ring with a battery, and is now a member of the Star Sapphire Corps!

Using the same ritual Atrocitus performs "so amateurishly", Scar sees many things: She sees the Guardians denouncing the chained up Alan Scott, Torquemada, and Mordru. She sees John Stewart and the corpse of his dead wife Katma Tui. She sees Hal Jordan and Sinestro with their backs to each other, surrounded by shadowed men. But most importantly, she sees Black Hand, wearing a black ring, and bowing before an unknown figure.

"Let there be light", Scar says, "So that it can be consumed by the Darkness."

Retrieved from "https://heykidscomics.fandom.com/wiki/Green_Lantern_Vol_4_38?oldid=1712726"
Community content is available under CC-BY-SA unless otherwise noted.