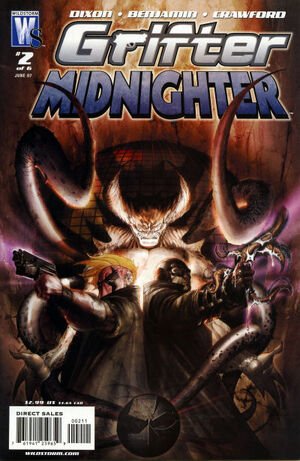 Another gun punk. Probably sleeps with the lights on. One hand on the gun under your pillow. One hand on your pee-pee. Just another yellow Nancy.

Grifter is assigned to assassinate Prince Ydar Ibn Mahoud. Mahoud is seen entering a trendy nightclub in Paris. What he doesn't realize though, is that the Midnighter has been assigned the task of safeguarding Mahoud's life. It appears that others have also taken an interest in the Prince. Grifter fights up against the Prince's bodyguards, while a Muslim extremist group attempts to kill Mahoud inside the club. Ultimately, the melee forces Grifter and Midnighter to cross paths.

The extremists open fire on Mahoud and it appears that the Prince is dead. Suddenly, his body shape shifts into that of a large monster and slaughters it's attackers. Grifter and Midnighter stop fighting with one another and stand ready to take on the creature. The monster shape-shifts into a humanoid female form and introduces itself as Zee. Zee tells them that the real Prince is safely hiding elsewhere. She further insinuates that Grifter and Midnighter's respective agencies may have assigned them to this case so as to eliminate each other.

On the Carrier, the Engineer, Jenny Quarx and the Doctor examine the body of Doctor Argot. They discover that Argot is actually a robot. Suddenly, an alien entity emerges from Argot's skull and attacks the group. They try to capture it, but it escapes.

Back in Paris, the Midnighter and Grifter have Zee in their car. Zee confesses that she knows about the Midnighter's recent visions. Before she can explain any further, a bright green light flashes before them, forcing Midnighter to steer the car off the road. On the horizon, both men see gigantic tentacles sweeping up from underground. Grifter draws his gun and hops onto the hood of the car, ready to do battle.

Retrieved from "https://heykidscomics.fandom.com/wiki/Grifter/Midnighter_Vol_1_2?oldid=1435284"
Community content is available under CC-BY-SA unless otherwise noted.