Start a Wiki
Part of the 'Grifter: Most Wanted' event 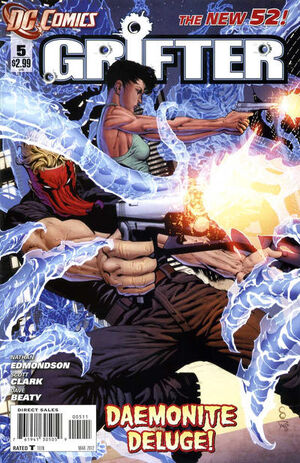 When the odds are stacked against you you don't fold, and you don't play the hand you're dealt. You play the player across from you and take him out of the game.

Appearing in "The Sleep in Seattle"Edit

Synopsis for "The Sleep in Seattle"Edit

Cole and his new partner Sofia make plans to escape the northwest, but first they need a little cash – and that calls for a quick grift. Cole can't get far in his con-artistry, however, before discovering that the Daemonites are coming after him in full force – and they have powers he could not have anticipated.

Retrieved from "https://heykidscomics.fandom.com/wiki/Grifter_Vol_3_5?oldid=1435271"
Community content is available under CC-BY-SA unless otherwise noted.