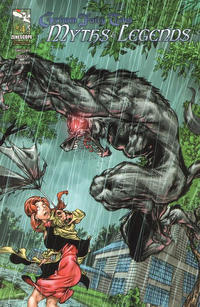 From the creators of Grimm Fairy Tales and the Wonderland trilogy, Zenescope's newest ongoing series continues here! The body count is rising as the hospitals patients and staff find themselves turning against one another. The Hospital isnt the safe haven it should be and it offers them no protection against the thing that stalks them. Unable to escape the facility they realize that the creature has them trapped right where it wants them. Don't miss out on what promises to be one of the hottest new series of the year from Zenescope Entertainment.

Retrieved from "https://heykidscomics.fandom.com/wiki/Grimm_Fairy_Tales_Myths_%26_Legends_Vol_1_4?oldid=1430035"
Community content is available under CC-BY-SA unless otherwise noted.