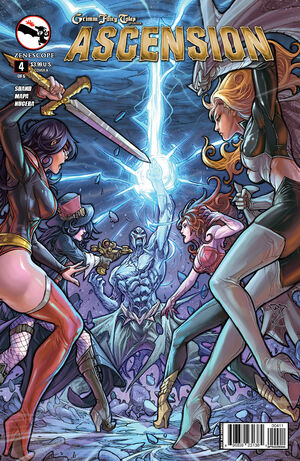 It’s all been building toward the final stand between the Being and those who oppose him. Can humanity stand a chance against an all-powerful, vengeful deity? Has the time of reckoning arrived? The battle that will decide the fate of the Grimm Universe’s deadliest villain begins now!

Retrieved from "https://heykidscomics.fandom.com/wiki/Grimm_Fairy_Tales_Presents_Ascension_Vol_1_4?oldid=1430065"
Community content is available under CC-BY-SA unless otherwise noted.