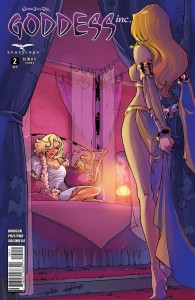 Writer LaToya Morgan (AMC's TURN) joins the Zenescope team with a brand new, modern re-imagining of Greek mythology like you have never seen before.

As Artemis investigates the murder of one of Venus Couture's models, Venus continues her power play by seducing Apollo. Meanwhile Zeus calls a meeting with his daughters, Athena and Artemis, to ready them for Venus' sinister plan.

Retrieved from "https://heykidscomics.fandom.com/wiki/Grimm_Fairy_Tales_Presents_Godstorm_Goddess_Inc_Vol_1_2?oldid=1430130"
Community content is available under CC-BY-SA unless otherwise noted.