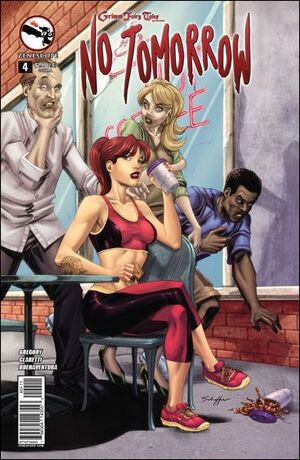 The horror series that every one is talking about reaches it's penultimate chapter! With the help of a university professor, Patrick uncovers the origin of Keres and what part he he may be destined to play in her downfall. But will that knowledge be enough to stop the Grimm Reaper gone mad who seems to be intent on bringing about the end of the world as we know it or will Keres succeed in insuring that Tomorrow never comes? Don't miss one of the best action/horror stories Zenescope has ever brought you!

THE ORIGIN OF KERES REVEALED!

THE STRANGE AND UNCANNY BIRTH OF PATRICK CLAY!

Retrieved from "https://heykidscomics.fandom.com/wiki/Grimm_Fairy_Tales_Presents_No_Tomorrow_Vol_1_4?oldid=1429998"
Community content is available under CC-BY-SA unless otherwise noted.