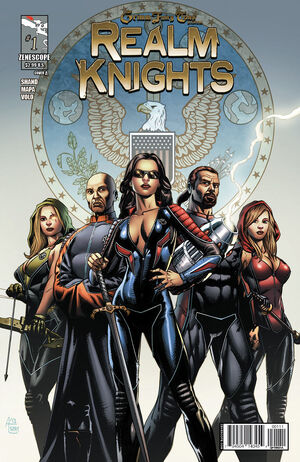 BRAND NEW SERIES! This August, ROBYN HOOD and UNLEASHED writer Pat Shand kicks off the all-new team book that unites all the fan favorite characters from the Grimm Universe! Sela. Robyn Hood. Red Riding Hood. Captain Hook. Jack the Giant Killer. Van Helsing. On their own, they are some of the most powerful beings in the Grimm Universe, but together, they are the REALM KNIGHTS. Brought together to stop an ancient evil from regaining his all-powerful weapons, can these conflicted warriors work out their own issues in time to save the world?

Retrieved from "https://heykidscomics.fandom.com/wiki/Grimm_Fairy_Tales_Presents_Realm_Knights_Vol_1_1?oldid=1430148"
Community content is available under CC-BY-SA unless otherwise noted.